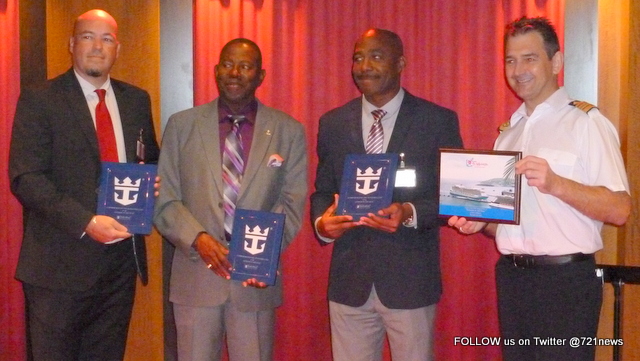 PORT ST. MAARTEN – For the second time this week, destination St. Maarten has received another new cruise ship, the Anthem of the Seas on her inaugural visit.

Captain Andersen told the gathering at the welcome ceremony that Royal Caribbean Cruises (RCL) is here to stay.  The Captain added that he was here when the Quantum of the Seas made its inaugural visit and before that he visited the destination in 2008 with the Adventure of the Seas.

Minister Sams during the customary exchange of plaques welcomed Captain Andersen, his crew and passengers to St. Maarten, and looked forward to many more visits with the new vessel which is only seven months old.  Peters, Port St. Maarten’s Governmental General Affairs official, also welcomed Captain Andersen and Anthem of the Seas, and offered similar sentiments of a fruitful long-term relationship.

Anthem of the Seas is part of RCL Quantum class, and is the second ship that is now sailing through the Caribbean.  The first ship of this class is Quantum of the Seas.  Construction of a third vessel, Ovation of the Seas, is currently taking place and is set to sail in fall 2016 while a fourth ship is scheduled for delivery in 2019. RCL announced on November 3 that it has entered into an agreement with Meyer Werft to order a fifth Quantum class ship for delivery in fall of 2020.

Anthem of the Seas has been described as the world’s most revolutionary cruise ship, and the next great adventure. Unprecedented innovations in ship design, thrilling activities, game-changing technology, multidimensional entertainment and robust, flexible dining opportunities come together onboard Anthem to create the ultimate, contemporary cruising experience found only on Royal Caribbean.

Anthem of the Seas maiden voyage took place on April 22. The vessel carries 4,905 guests and 1,500 crew, and has been described as RCLs most innovative ship.

The cruise ship sailed into New York harbor early November, and will be homeporting out of Cape Liberty Cruise Port.

Staff from Minister Sams cabinet were also present along with other officials from Port St. Maarten to welcome Anthem of the Seas to the destination on Wednesday.