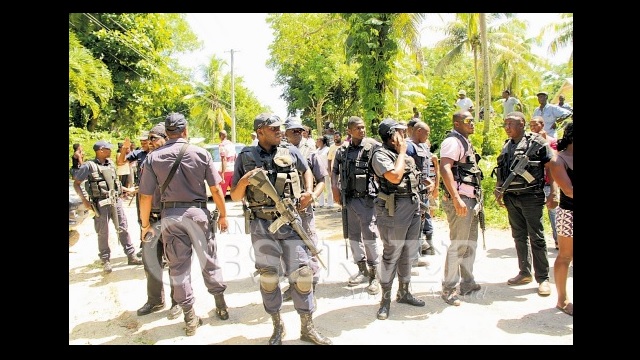 CAMPBELLTON, Hanover — This rural community has been left in shock and despair following Thursday night’s massacre which left six members of a family dead and four hospitalised after rampaging gunmen peppered them with bullets before torching their five-bedroom board house.

According to Senior Superintendent Wilford Campbell, commander of the Hanover Division, the police were summoned to the Campbellton community about 11:30 pm after residents reported that they heard a barrage of gunshots.

Upon their arrival in the community, the police team spotted a house engulfed in flames and the fire brigade was called.

Firefighters, after carrying out cooling-down activities, found the charred remains of the six family members were found in the rubble. Four other occupants of the house who were severely burnt were taken to the Noel Holmes Public General Hospital where they were admitted.

Yesterday, grieving members of the community expressed shock and fear over the gruesome murders.

“This is the only time this ever happen. Me never see this, not even town (Kingston). This is more than brutal slaying. Even Jesus’ angels should be weeping,” said one resident.

“Man is one of the wickedest things,” a man who was among a group having strong drinks, was overheard saying.

Lynette Bloomfield’s sister, Deloris Hendricks, who lives in a nearby district, was a picture of grief.

“Me feel bad. We just can’t come to it. Me hear from last night that them shoot them up and set the house on fire,” the grieving relative said, adding that her niece, Kerriann, was killed hours after she returned from abroad, where she spent a three-month vacation.

Commissioner of Police Carl Williams, who accompanied Minister of Security Peter Bunting to the troubled community yesterday, promised that the police, working in tandem with members of the Jamaica Defence Force, will not leave any stone unturned until the perpetrators of Thursday night’s massacre are brought to justice.

“We are going to work closely with the military and we are going to ensure that the best investigative resources that we have in the country are deployed here. We are also going to get a team of savvy operational people here in Hanover and they will not leave this parish until the killers are found. We know who they are and we are coming at them,” the police commissioner said.

Although he did not provide details, the commissioner said intelligence suggested that the slaughter of the six people was linked to an ongoing disagreement.

“There were some disputes from weeks ago… I am not going to speak on the details of it now because those matters are still under investigation, but suffice it to say we have a very good sense, based upon our investigation, on what led to these killings here last (Thursday) night and we are going to use it to aid us to catch the perpetrators,” Williams told reporters.

Meanwhile, Bunting told members of the media that upon the completion of the processing of the scene, “we will know how many may have died from gunshots versus how many died from the fire.

“We are going to have both police and military mobilised to respond to this situation,” said the security minister.

Opposition spokesman on security Derrick Smith, in a statement, said: “When a parish with a population of just over 70,000 is racking up the number of murders Hanover has racked up since the start of the year, you know you not only have a frightening situation on your hands, but a situation that requires immediate corrective attention on the part of the Government.”

Smith, in extending condolences to the families, relatives, and friends of the victims, and is wished those injured in the attack a speedy recovery, calling on anybody who may have information that may help the police in their investigation to take a stand against criminality and make that information available to the police.

Thursday night’s bloodbath pushed the murder tally in Hanover to 54 since the start of the year, compared to 28 over the corresponding period last year.