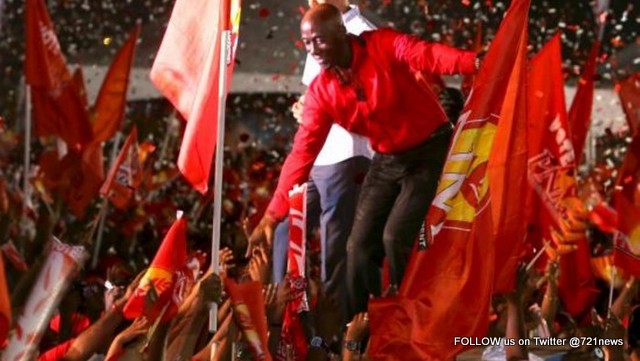 The preliminary figures released here show that the PNM had won 23 of the 41 seats with the remaining 18 going to the PP that had won 29 seats in the 2010 general election.

Earlier this evening supporters of the PNM took to the streets in Tobago in celebration.

PNM leader Dr. Keith Rowley is due to address supporters at the PNM headquarters later tonight.

A big casualty in the elections is tormer national security minister Austin Jack Warner, who switched constituencies, contesting the Chaguanas East rather than the Chaguanas West seat he won in 2010 and again in 2013. He has garnered less than 50 votes.

Warner speaks to the Media“The kabal is dead, dead, dead. That is my gift to the country…” ILP Leader Jack Warner told members of the media a short while ago.