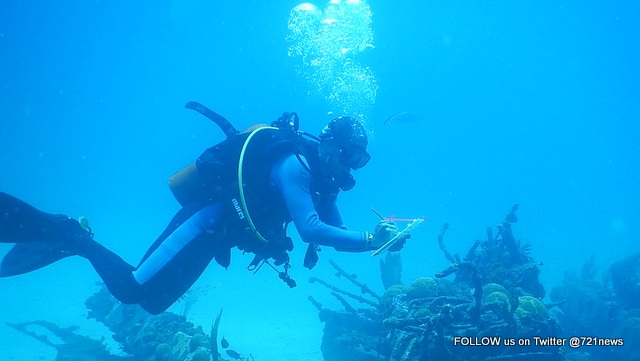 PHILIPSBURG, Sint Maarten — For the last few weeks the St. Maarten Nature Foundation has been very busy confronting the effects climate change has been having on the island and is concerned that there may be an increase in climate related issues on the island in the future.

On the Ocean Front; the Foundation has been monitoring the Coral Reefs inside of the Man of War Shoal Marine Park for incidents of Coral Bleaching. Coral bleaching is the dying of corals due to high water temperatures.  The Nature Foundation decided to check for coral bleaching due to the prolonged period of very hot, calm weather the island has been experiencing over the last few weeks. Based on the results it was decided to put into effect the Coral Bleaching Response Plan which was drafted by the Nature Foundation in 2010. The initial phase of the plan includes continued monitoring and the implementation of various management strategies to combat the effects of Bleaching.

Similarly, The Nature Foundation has been assisting the VROMI Ministry in raising the water level of the Fresh and Great Salt Ponds which were dangerously low because of the drought. Because of the dangerously low water levels in the Great Salt Pond Tilapia were dispersed in areas through the wetland. Once the floodgate was opened between the Fresh and Great Salt Ponds an increased number of tilapia could be seen by the Firgos Channel, many of which were already stressed by low oxygen, salinity and elevated water temperatures. These fish will eventually die because of the conditions caused by the drought.

Additionally, the Foundation has been researching ways to mitigate the effects of Sargassum Seaweed on the island. “Many nearshore communities, in particular in Pointe Blanche, are being very negatively affected by the decomposing Sargassum which may not be healthy to breathe. We are in constant contact with colleagues from around the region in looking for a solution against the seaweed invasion. Unfortunately when the seaweed has been cleaned from beaches it washes back ashore the very next day. This is a significant problem due to the health effects the decomposing seagrass has on the population and steps should be taken to implement a structured cleaning program while we research ways to mitigate the effects, commented Tadzio Bervoets.

“Unfortunately these are the effects of a changing climate and we will have to deal with these and potentially new challenges. As a Small Island Developing state in the Caribbean we need to address these issues locally, regionally and globally in order to find solutions to these serious problems which will affect our communities more and more,” stated Bervoets.