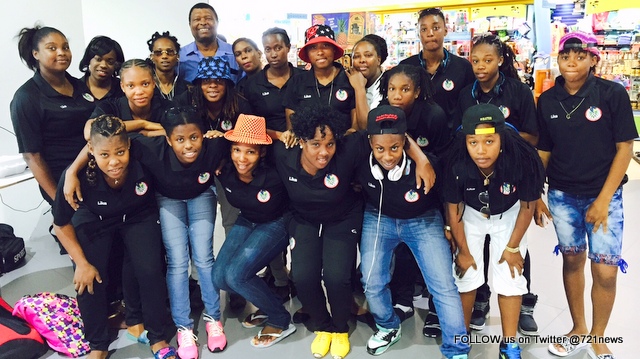 GREAT BAY – The Dominica Female Football Team of 25-strong got stranded here on Thursday, the day Tropical Storm Erika passed well south of the country.  The team travelled to the Dominican Republic for an activity and on their way back to Dominica they landed in Sint Maarten the day the storm passed their island.

The team spent several days here since the passing of Erika because of the devastation caused by the storm back in the Commonwealth of Dominica.  Since last Thursday was very limited air travel to the island, due to damage assessments that needed to be carried out to the different airstrips prior to any resumption of commercial travel to the country.

The Dominica Female Football Team have been received a good dose of Sint Maarten Hospitality while on the island.

Loyd Paul and Shanka Serrant, were instrumental in coordinating accommodations, meals and transportation while they were here on the island, and at the same time worked tirelessly to get the team back home to family and friends.

President of Parliament Hon. Dr. Lloyd Richardson and the Director of All Waste in Place also assisted as well as Minister of Tourism & Economic Affairs Hon. Claret Connor.

The team left the island on Sunday for Guadeloupe and took the ferry over to Dominica on Monday morning and have arrived safely back in their homeland.

PHOTO CUTLINE: President of Parliament Dr. Lloyd Richardson (4th from left back row standing) along with the manager and players of the Dominica Female Football Team. (Photo by Kenneth Serrant)