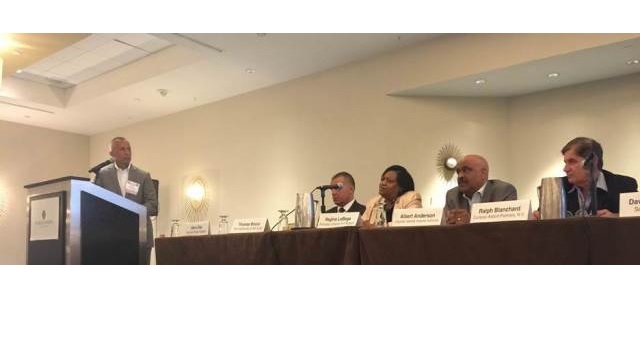 Regina LaBega at Airports Conference of the Americas in San Juan, Puerto Rico:

SIMPSON BAY, St. Maarten — “Cuba has been open for quite a long time, albeit to the European, Canadian and Latin American markets in particular. Even travelers from the US have been finding their way into Cuba, sometimes via Canada and other destinations.”

This was the opinion expressed by the managing director of the Princess Juliana International Airport, SXM, Regina LaBega at the Airport and Airport Executives Forum of the Airports Conference of the Americas, held in San Juan, Puerto Rico last Wednesday.

“Even before the historic thawing of relations between the US and Cuba, it was frequently predicted that the so-called re-opening of Cuba would adversely affect tourism in the rest of the Caribbean. However, the facts so far have not borne this out,” LaBega said.

She explained that “in the short term, the effects of the normalization of relations between the US and Cuba are not so visible especially because the process will take some time.” LaBega was an invited guest speaker at the forum of airport executives.

“The cruise sector may begin to feel the impact several months down the road, given the proximity of Cuba to the US and the expected ‘rush’ to see Cuba before it is transformed by the same US tourism which it had been loathe to embrace wholeheartedly in the past,” she said.

“In my opinion,” LaBega continued, “some of the predictions and expectations would seem exaggerated because there is no indication at the moment that the regime in Cuba would drastically change its policy in terms of tourism development. Besides, the infrastructural investments that would be needed to accommodate the influx that is forecast would take several years if not decades to build. These include modern airports.”

All of these, in her view, could as a matter of fact, open up opportunities for countries like Jamaica, which because of their proximity to Cuba, could become a hub for that country.

The forum also addressed issues such as the possible expansion of the use of kiosks and programs such as Global Entry in Latin America and the Caribbean and the question of Government Expectations and Business Realities and Capital Improvement Limitations.

LaBega expressed doubts about the feasibility of the Trusted Traveler program in Latin America and the Caribbean “at the moment, given the international climate and the widespread concerns about illegal immigration.”

After listing reasons why she believed the program may not be well-received in the region at present, she added: “What, on the other hand, many Caribbean countries would look favorably on would be a US pre-clearance regime such as exists in Aruba for example.”

“We in St. Maarten are very interested in this, as it offers an attractive incentive for US visitors who on returning to the US would not have to be cleared by the US CBP again,” said the SXM managing director.

Regarding government expectations and business realities, LaBega explained the corporate structure of the Princess Juliana International Airport Operating Company, PJIAE, which limits direct government intervention and offers the company the flexibility to raise its own funds.

“In my own experience,” she said, “the best way to deal with government involvement is to run a professional, profitable, and transparent operation which serves the needs of the community and which projects itself positively on the international scene. It means being a good corporate citizen, and allowing the result of your stewardship to speak for itself. Above all, it requires that one deals with delicate political sensitivities in a mature manner, but always keeping the interest of the company at the forefront.”

“It was a very interesting and quite interactive forum,” LaBega said this week, adding that several participants agreed with her positions, although there were those who held different views as well.