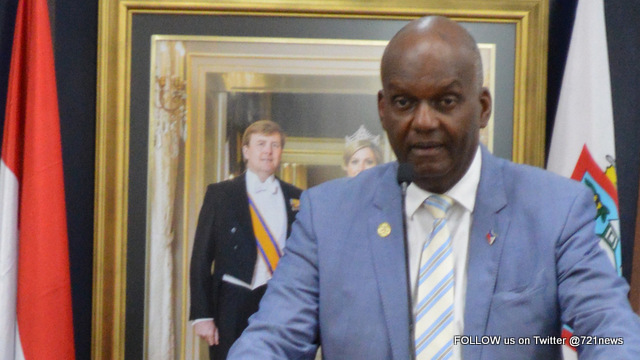 PHILIPSBURG, ST. MAARTEN – The Honorable Minister of Justice Dennis Richardson has given his commendations to the police service for the quick arrests of the suspects in the robbery and murder of Police Office Gamali Benjamin.

Speaking to the media at the Council of Ministers Press Briefing on Wednesday, Minister Richardson was emotional as he spoke of the tragedy and also the challenges they are facing in moving forward.

“Our admiration goes to the police force for the quick and successful apprehension of the perpetuators. They have done it professionally. They controlled their emotions. They did their work in the way they should. They deserve our admiration. This will help with the healing process,” Richardson said.

The minister was asked about steps to provide more insurance coverage for police officers. He explained that they are taking a comprehensive approach to the matter of coverage. The aim is to have all civil servants covered and especially those who work in high risk positions such as the police.

Richardson explained that police officers as part of the Netherlands Antilles Corps did have some insurance coverage although not adequate. However, since the change of status to country, no agreements had been signed to provide coverage for the police force. Currently, the government is reviewing several insurance proposals which would provide disability and life insurance for personnel.

“There are a backlog of policies to be done and we are dealing with them,” said Minister Richardson.

The Honourable Prime Minister Marcel Gumbs added that his cabinet has been kept busy outing fires they did not start and cleaning up messes they had not created. He revealed that an Insurance Work Group is being formed to look at the entire government system as there is no cohesion and much confusion in the current processes. The working group will include stakeholders from various ministries with the goal of reviewing all policies to do with insurance, liabilities and coverage for personnel, buildings and equipment.