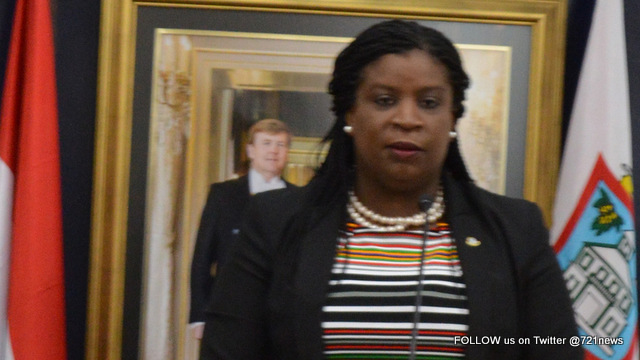 PHILIPSBURG, ST. MAARTEN – No one thing can be blamed for last week’s tragic shooting of a police officer. However, the community can play a part in seeing that incidences such as this are reduced, says the Honorable Minister of Education Rita Bourne-Gumbs.

Speaking at the Council of Ministers Press Briefing on Wednesday, August 12, 2015, the Minister called for a return to community living in which everyone looked out for each other. She said the tragedy had brought the nation together in prayer and concern but that had been short lived.

While her ministry was continuing to look strategically at what can be done to curb youth involvement in crime, she emphasized that it was not a situation which could be solved using a top down approach.

“It will take a phased approach; parents, educators, youth. We must address the situation on all levels.”

“Parents it begins with you. Do not expect anyone to take responsibility for your child. Do not allow the influence of the streets, and television to parent them,” the official stated. “Community do not turn a blind eye to the youth. Look out for them.”

The minister who has responsibility for culture, youth and sports said government has several programs including the ‘Start Here’ initiative which will kick off on September 3 in which young people can participate in. However, the programs will not work if young people do not take the initiative to get involved.