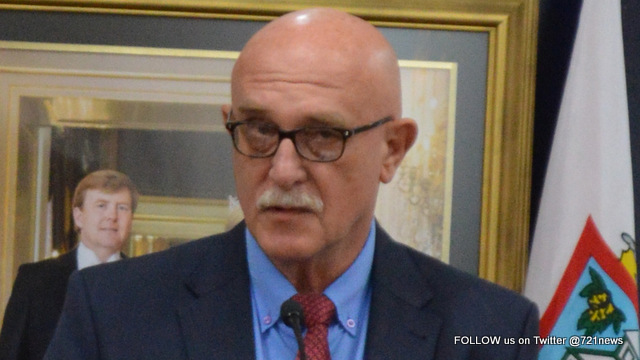 PHILIPSBURG, ST. MAARTEN – The finalization of the 2015 budget and other government processes are being hampered by the shifting and unreasonable goal posts from the Dutch Board of Financial Supervision (CFT). This was the message expressed by several members of the Council of Ministers during a press conference on Wednesday, August 12, 2015.

Finance Minister Martin Hassink said the CFT did not approve the proposal which would allow the government to make some necessary capital investments. “We spent half of the year in conversation with the CFT” but still they have sent instructions which have added further delays. The government has submitted the required paperwork and are awaiting the September 4th meeting of the Kingdom Council of Ministers for a decision.

Hassink said the government is prepared to take the necessary steps but are “limited in execution by CFT instructions.”

Some of the instructions included a request that St. Maarten resolve the 60 million guilder deficit accumulated from 2010 to 2014. This they want done between 2015 and 2018. CFT has also asked that the cost of care and pensions and the increase of the pensionable age must be legislated soonest. Outstanding payments to AVZ and SZV must be completed in the next three years.

Minister of Justice Dennis Richardson declared he was prepared to break the law if it would allow the country to move forward.

He explained that when he took over the ministry of justice a number of issues were on backlog. About three million guilders is needed to provide additional support to police. However, as they are subject to financial supervision this money has not been allocated. “For this to happen other issues in justice would have to be curtailed,” explained Minister Richardson.

“Yes we have to carry out proper financial management. But the truth is, we inherited debt and are under pressure from the Dutch financial supervisory board to fix outstanding matters. We did not start with the strong financial position that they proclaimed we would have. Three things happened at 10-10-10. We inherited a debt that we did not profit from and did not have before. The building up of the country organization did not happen, notwithstanding promises made.

“Curacao inherited the majority of the central government infrastructure. We now have to build from scratch. This was not taken up in the compensation and not discounted in the assets and liabilities. Of the 180 million guilders promised in the debt reconstruction. Only 60 million has been received. The Dutch silently scratched through the 120 million because we did not meet a deadline.

“Then they come to demand compensation of former years in a limited period of time. Demand that we resolve debts to SZV. Negotiations have become more difficult.

“This country has the right to defend and protect its people. I will do it as minister of justice even if it means transgressing CFT norms. If Officer Benjamin was prepared to give his life for this country I am prepared to spend a few years in jail for the same,” the minister declared.

The justice official told the press that the recent visit by Chief of The Netherlands Police Force Gerard Bouman did not go as expected.

Richardson said the expectation was that they would discuss and agree on steps to be taken to improve the island’s justice system collectively. Rather Richardson was informed that the police chief had already agreed with Dutch ministers of Security and Justice that the priority was to combat corruption on St. Maarten.

Fifty detectives are coming to St. Maarten with 22 million Euros allocated to strengthen the justice chain. Richardson said a protocol was signed in the Netherlands but Bouman relayed that he had not come here for that and didn’t need local involvement to do what they felt needed to be done.

When the minister inquired about local input from his ministry and the police force, he was informed by the police chief that “We don’t need them either. We have so much information on the situation here that it does not justify working with you all.”

“We have told the Dutch representative to St Maarten that we are not amused by Bouman’s remarks and want to know if they’ve put aside the protocol and not taking into consideration the kingdom laws, ministers and police force. We are still awaiting response,” Minister Richardson ended.