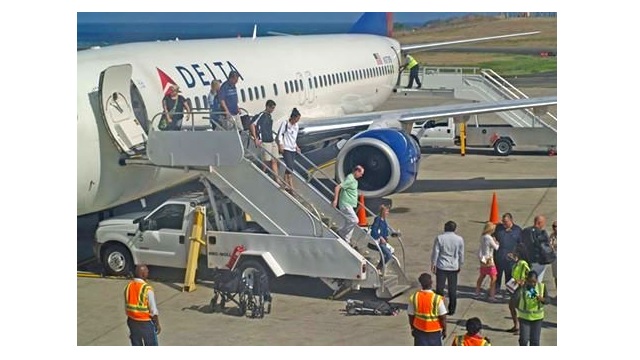 ST. GEORGE’S, GRENADA, – Just one month after the launch of its new service between Atlanta and Grenada, Delta has indicated it will not only return the service in December, but also add two additional weekly flights during the peak holiday season.

Delta will resume its seasonal service from Atlanta to Grenada on December 19th with three weekly flights – Mondays, Thursdays, and Saturdays. The schedule will return to weekly Saturday-only flights from January 9.

On June 6, 2015, the airline began operating a non-stop service to Grenada from its Hub in Atlanta. The weekly scheduled flight, which concludes on August 15, 2015, added 640 seats to Grenada’s airline capacity from the U.S market in June. To date, the four-hour flight has performed quite well for the destination.

Chief Executive Officer at the Grenada Tourism Authority, Rudy W. Grant, expressed his elation at the potential benefits the increased seat capacity could have on the country’s tourism industry. “The Atlanta flight opens significant opportunities for expanding our airlift, not only from Atlanta but throughout the USA, Canada, and Europe,” he said.

Grant, who recently returned from a Grenada Destination Roadshow in the United Kingdom, indicated that the Atlanta flight formed an integral part of the discussions with the travel trade in Manchester.

“Delta owns 49 percent of Virgin Atlantic. As such, there is a great possibility that Delta’s Atlanta flight might serve as a valuable connection for those traveling from Manchester aboard Virgin’s non-stop flight to Atlanta.”

At a scheduled departure time of 9:50am, Delta’s Atlanta-Grenada flight has already begun functioning as a noteworthy connection for travelers originating from other US cities. To date passengers aboard the flights to Grenada have originated from cities, such as, Boston, Charleston, Indianapolis, Los Angeles, Minneapolis, New Orleans, and Washington DC, to name a few.
The new Delta service from Atlanta was introduced as a trial during the summer months.