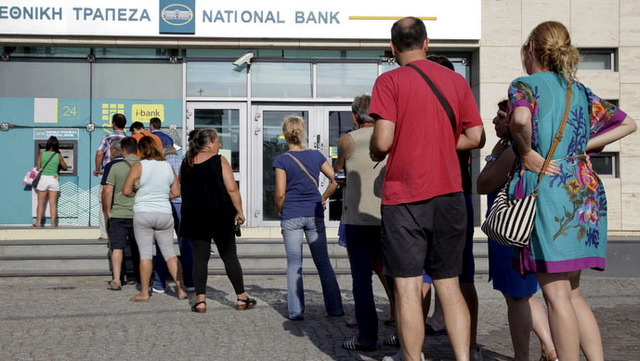 GREECE — Tens of thousands of Greeks rallied on Monday to back their leftwing government’s rejection of a tough international bailout after a clash with foreign lenders pushed Greece close to financial chaos and forced a shutdown of its banking system.

With a popular referendum on the bailout planned for Sunday, Prime Minister Alexis Tsipras put his own position on the line, saying he would respect the result of the vote but would not lead a government to administer “austerity in perpetuity.”

“If the Greek people want to have a humiliated prime minister, there are a lot of them out there. It won’t be me,” he said in an interview on Greek state television as one of the biggest rallies seen in Athens in years was taking place.

The show of defiance came at the end of a day that started with stunned Greeks waking up to face shuttered banks, long supermarket lines and overwhelming uncertainty over Greece’s future in the euro zone.

European leaders and policy makers, wrong-footed by Tsipras’ shock announcement of the referendum in the early hours of Saturday morning, warned that it would be a plebiscite on Greece’s future as a member of the single currency.

With Greece hours away from defaulting on a 1.6 billion euro loan from the International Monetary Fund, the crisis has escalated quickly.

Ratings agency Standard and Poor’s cut Greece’s sovereign debt rating one notch further into junk levels to CCC-, saying there was a 50 percent probability it would leave the euro zone.

Greeks – used to seeing lengthy talks with creditors end with an 11th-hour deal – were shocked by the turn of events. Queues snaked outside ATMs and inside supermarkets while fears of disruptions to fuel and medicine supplies grew.

Drugmakers said they would continue to ship medicines to Greece in coming weeks despite unpaid bills, but warned that supplies could soon be in jeopardy without emergency action.

The breakdown of talks has pushed the European Union and euro zone into uncharted terrain. The Athens stock exchange was closed like the banks, but other financial markets fell on fears that Greece could be heading out of the euro.

The blue-chip Euro STOXX 50 .STOXX50E index fell more than 4 percent, with bank shares down sharply [.EU] .SX7E. By midday, all three major U.S. stock indexes were down more than 1 percent.