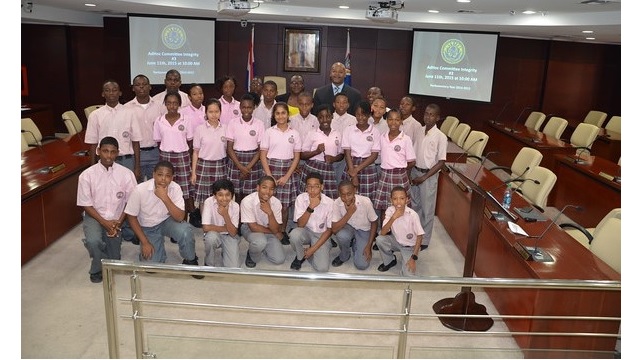 Students also get the opportunity of role playing where seven act as members of the Council of Ministers while another 15 as Members of Parliament.  An issue is then selected and debated.  This takes place under the President of Parliament or Vice Presidents who form the presidium of parliament.

Vice President Hon. Cornelius de Weever provided students with information and about the role of the House of Parliament.  The students also sat in on the Ad Hoc Committee of Integrity meeting which was chaired by MP De Weever, receiving a first-hand view of how MPs debate an issue.

The Presidium of Parliament are of the opinion that it is  important to continually engage the country’s youth in learning about the important role of the House and how it impacts the way of life of citizens with respect to the drafting of laws.

In May, two additional schools visited the House of Parliament, namely the Sister Magda Primary School, grade five with 38 students and three teachers.

Schools that are interested in visiting the House of Parliament should contact the parliamentary secretariat via email: info@sxmparliament.org or call 542-0812.

PHOTO CUTLINE: Vice President of Parliament Hon. Cornelius de Weever standing in the back row with two teachers and the sixth grade students of the Seventh Day Adventist Primary School.