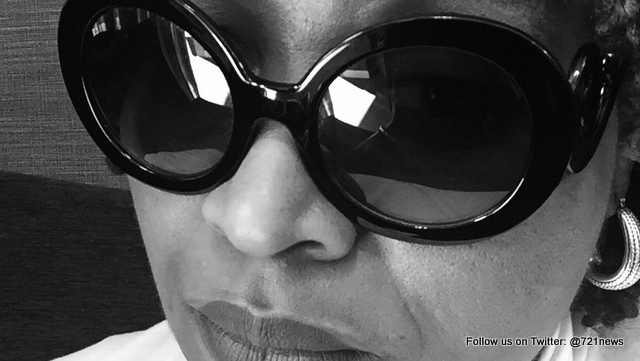 On Sunday, Jack was a panelist on “Representing Place and Race” at the Black Portraitures Conference in Florence, Italy. Over 200 speakers presented research papers and working commentaries on conference panels and in addresses at Villa La Pietra, home of the New York University Florence program.

New York City’s First Lady, Chirlane McCray, delivered the opening address at the conference, on Friday, May 29. The “who’s who” audience of artists, intellectuals, and movers and shakers in art, film, and related fields came mostly from North America, Europe, and Africa.

Drisana Deborah Jack said on Sunday that, “It is humbling and empowering to be in Florence with some of the great minds in the field of Black visual culture. Here we are looking at the history, the present and the future. I am privileged to add my images of St. Martin to the larger cannon of images and ideas.”

Jack is a leading St. Martin artist and poet. Her poetry books, The Rainy Season and Skin, are published in the Caribbean by HNP (Jack’s artwork will be on exhibit at New York’s El Museo Gallery, June 12 – August 7, 2015).

The NYU Florence conference, “BLACK PORTRAITURE{S} II: Black Body and Re-Staging Histories,” may be timely in offering what the organizers term as, “comparative perspectives on the historical and contemporary role played by photography, art, film, literature, and music in referencing the image of the black body in the West.” The Harvard University professor, Louis Henry Gates, Jr., was one of the organizers of the four-day conference. http://www.blackportraitures.info/?page_id=56.

On the other side of the Atlantic, “‘the polyglot pride of st. martin’: an interview with lasana m. sekou” by Caribbeanist scholar Dr. Sara Florian, was published in Tripwire 9, a journal of poetics.

Editor David Buuck announced the new edition of the radical thought journal from California, on May 27. “In the interview, Lasana comments on language, literature, the political ‘structure’ and ‘adjustment’ of 2007 and 2010, and race in St. Martin, North and South,” said Sample.

The theme of Tripwire 9 is, “Transnational  / Translational.” The featured authors and translators of their works are from the USA, Canada, Mexico, Italy, Algeria, Iran, India, and China among other countries. http://tripwirejournal.com/new-issues/.

HNP and Arte y Literatura are the publishers of Sekou’s books, including his multilingual titles, Nativity, Pelican Heart, and Musa desnuda. The poetry of the St. Martiner has been translated into Spanish, French, Dutch, German, Turkish, and Chinese.

Tripwire editors describe the journal as one “devoted to a counter-institutional exploration of radical and experimental modes of contemporary poetics, art, and cultural politics.” http://tripwirejournal.com.