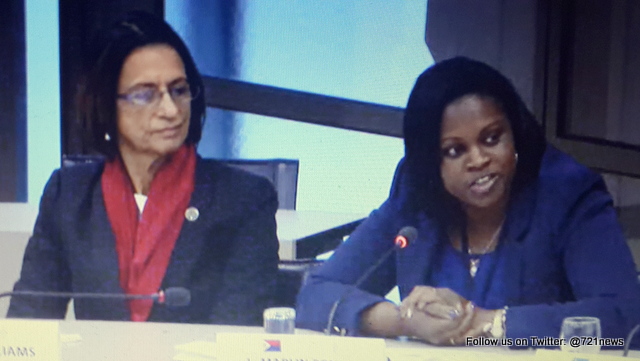 THE HAGUE--A great success, probably the most constructive ever. That is how the leaders of the delegations of Aruba, Curaçao, St. Maarten and the Netherlands perceived the Inter-Parliamentary Kingdom Consultations IPKO, which was closed off in The Hague on Friday, with one major triumph: a dispute regulation for the Kingdom.

Reaching an agreement on the format of a dispute regulation, a higher body where the partners can seek a binding ruling on “strictly legal differences of stipulations of the Kingdom Charter,” took years, because the Netherlands was never in favour of a binding dispute arrangement.

“We reached an agreement which I am very proud of. It is a topic that we have been discussing for years, but which is very current. Together we took this big step,” said IPKO Chairman Jeroen Recourt, who spoke of “growing relations” with increased trust and a better atmosphere.

President of the Aruba Parliament Marisol Lopez-Tromp said the discussions were on a high level. “Even though we had our differences here and there, we still achieved great results,” she said at a press conference following the signing of the decision-list by the delegation leaders.

Vice-president of the St. Maarten Parliament Leona Marlin-Romeo spoke of a “clear dialogue and good discussions that were open and based on mutual respect.” “We proved that it can be done, a dispute regulation with hands and feet,” said President of the Curaçao Parliament Mike Franco.

Journalists, including a number from the islands who were part of the press conference via video-conferencing, asked various questions about the dispute regulation. Member of Parliament (MP) Rene Herdé of Aruba’s AVP party said that “a very concrete start was made with the contours” for a dispute regulation with a broad range, which covered about every legal interpretation of the Charter.

Franco explained that the dispute regulation would cover the legal grounds of everything that was tied to the Charter. According to MP Sarah Wescot-Williams of the DP St. Maarten, instructions, such as those given to the St. Maarten Governor by the Kingdom Council of Ministers, would resort under the dispute regulation. “It will cover anything that can be brought back to the Charter.”

About the role of the Kingdom Council of Ministers and the decisions that were taken there, Recourt said that the body in charge of the dispute regulation would assess whether matters had been handled in line with the law, and if decisions were not against the stipulations of the Charter. He spoke of a “growth model.”

The difference between decisions based on the Charter and those taken based on political motivations would always remain a grey area, said Recourt. “But that is for the judges to decide.”

With a clear mandate of the four Parliaments, it is now up to the governments of the Kingdom to work out the details. This will take place at the June 16 Kingdom Conference in Curaçao. “Just as in every democracy, Parliament always has the last word, also on a Kingdom level. The governments have to listen to that and if they don’t, we will remind them of it,” said Recourt.

Curaçao MP Elmer Wilsoe of the PS party said it was 2-1 for the Parliaments. He said the Curaçao Parliament would prepare a motion to tell government that it has to defend and carry out the wish of the Parliaments.

The proposal of the Dutch delegation for a Kingdom Law on the integrity of government, including the possibility of a Kingdom Integrity Chamber, was transferred to the next IPKO, which will take place in St. Maarten from January 5 to 8. At that time the delegations will also discuss the possibility of establishing a matrix of parameters in the area of integrity.

The IPKO this week also yielded results in other areas. Governments will be asked to facilitate easier travel between the Dutch Caribbean islands by allowing people to use their ID card instead of passport and to restrict the filling in of immigration forms.

In the area of education, the delegations agreed to request the Dutch Government to arrange a local help desk on the islands of the Dutch study financing organisation DUO. It is important for Aruba and St. Maarten that DUO’s pilot project in Curaçao to facilitate a more lenient repayment of study debts is also introduced on those islands.

To promote equal opportunities for Dutch Caribbean students taking up their studies in the Netherlands, Dutch Minister of Education, Culture and Science Jet Bussemaker will be asked to look at the possibilities to have intake sessions of Dutch universities and HBO schools take place via video-conferencing or other social media, so aspiring students don’t have to travel to the Netherlands for selection talks.