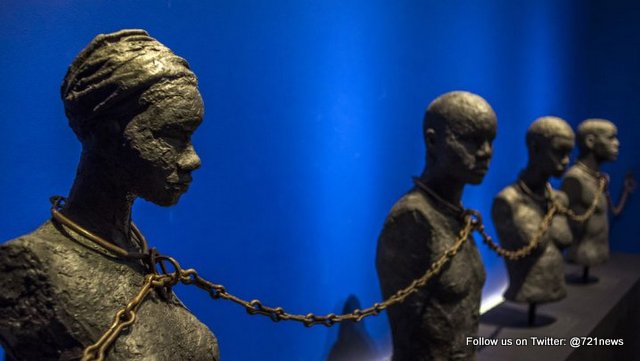 French President François Hollande inaugurated a museum and memorial site to honour the memory of slaves and their struggles in the French Caribbean island of Guadeloupe on Sunday.

Hollande, who is on a tour of the Antillean islands that includes a scheduled trip to Cuba, paid homage to slaves and their sacrifices at the memorial, which is the first of its kind by France to remember those who suffered during the slave trade.

“The way I see it, this monument will allow Guadeloupe, but also the entire Caribbean with a deep link to Africa as many African leaders will be here, to tell the whole world that the fight for human dignity is not over,” Hollande said on a trip to the French Caribbean island of Martinique on Saturday.

“We have to remember what happened, remember history of course, but also we must find hope, and we must fight on,” he said, to explain the significance of Sunday’s inauguration.

Called the Memorial ACTe, the site is described as “a Caribbean centre on the expression and memory of slavery and the slave trade” and is housed in a former sugar factory in the Guadeloupian city of Pointe-à-Pitre.

The museum holds hundreds of objects dating back several centuries that bear witness to France’s turbulent history — that included slavery from the 17th to 19th centuries — when black people were sold to work on the islands’ sprawling sugar plantations.

Thierry Létang, an anthropologist, showed whips and shackles in the museum to a film crew. “This type of lock is very French. They were worn around the feet,” he said, holding the heavy rusted shackles against his feet.

“We don’t have museums or memorial sites that allow us to understand this part of French history and especially places that allow people to gather without courting controversy. But this memorial site allows us to do so,” said Patrick Lozès, president and founder member of the Council Representing the Associations of the Black People of France.

France abolished slavery in 1848 but only recognised slavery as a crime against humanity since 2001.

The cost of the Memorial ACTe project, however, has come under scrutiny. The 85 million euros spent on the memorial could have been better used elsewhere, critics say, in a region where 60 percent of young people are unemployed.

Hollande’s visit to the site has also put the spotlight on reparation claims made by descendants of slaves in Guadeloupe.

In 2013, Hollande acknowledged the country’s “debt” to Africa because of slave trade and the “baneful role played by France.” But he also said that this history “cannot be the subject of a transaction”, AP reported.

The memorial, which hopes to welcome 300,000 people annually, is scheduled to open to the public in July.