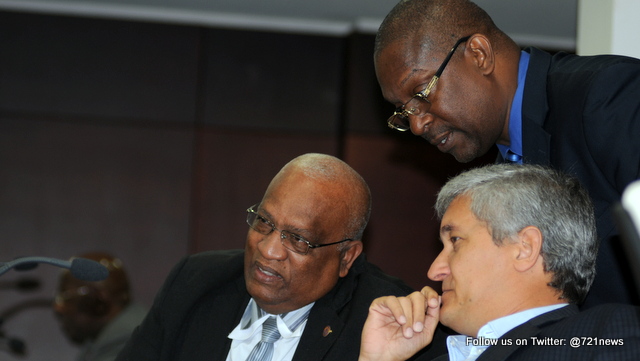 PHILIPSBURG – United People’s (UP) party Member of Parliament (MP) Hon. Maurice Lake addressed on Tuesday in the House of Parliament social media rumours that he was involved in a plot to throw down government and send home the Cabinet of Prime Minister Marcel Gumbs.

“It’s good to be back in the House of the People.  There were a lot of rumours that was going around about my person while I was off island on a family matter.  I heard that some close source (unknown to me) had stated that Maurice Lake had thrown down the Government, resigned from the UP Party; that he is poisoned by greed and money; doesn’t have patience; don’t understand the budget situation; and the latest now is that he wants to become again Minister of VROMI which is all nonsense to me.

I heard it was the buzz word for the social media readers with all kinds of hearsay and close sources here and there, but of course with no facts.  The only close source to me is God and my family.

“Imagine social media becomes the news of the day.  Incredible!  Social Media becomes facts; a bunch of nonsense for those who use Social Media as a source for factual information.  This is becoming a scary trend here in St. Maarten where we listen to others “here say” than getting the real facts.

“This is my first public meeting since back on the island, and I want to set the record straight that, Maurice Lake has not met with anyone or had discussions of this nature related to all the rumours, because they are very far from the facts. This is not within my character.  I am very disappointed with my own who should know me better and would only would voice my opinion and is not afraid to address the people frustrations within the community. I will discuss this issue in an internal meeting with Government.

“The people didn’t elect me to break Governments but to work to bring stability and make change to empower our people to become or continue to be leaders within their own Country.  I am here for the people of Sint Maarten and about getting things done for our people.

“As I always stated in the House of the people, we need to raise the bar in Parliament.  Some political leaders need to show political maturity for the next three and a half years to move this Country forward.

“Some of our leaders like to throw rocks and then hide their hands in which the people are getting tired of these political games. We got to be very responsible what we are saying.  We are doing a lot of speculations and confusing the general public.

“People are watching and as elected officials we got to be more responsible in the people’s house. The people just want to know they can have a stable government that is looking out for them. Some of our leaders cannot relate to some of our Sint Maarten people going hungry on a daily basis.  We need to move forward and deal with the people’s issues.

“The local business people just want to know that their investments are safe and we are serious about building our nation; about governing this country; and about making decisions that will develop the economy to create jobs and grow as a people,” UP MP Hon. Maurice Lake said on Tuesday.