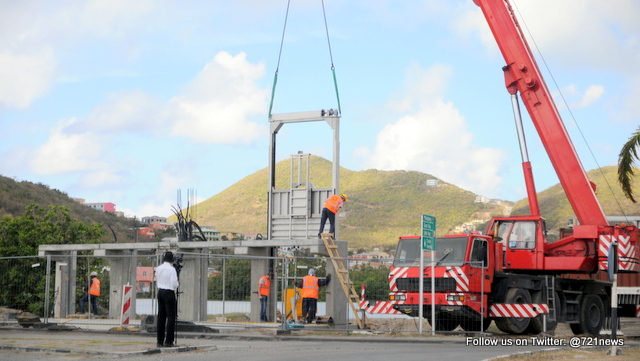 PHILIPSBURG, Sint Maarten – Ministry of Public Housing, Environment, Spatial Development and Infrastructure (Ministry VROMI), Project Manager, Raymond Chittick supervised the installation of the first two floodgates yesterday by Windward Roads and HCW, which is the firm that designed and developed the floodgates in the Netherlands.

The grills were also installed, which will operate as a preventative mechanism for large debris  and other materials from streaming through the gates. The remaining gates will be installed during the course of the week and completed by Friday.

The complete structure of the floodgate project exists out of 4 gates, each measuring 2.5 meters in width, totaling a structure of approximately 10 meters wide and approximately 4 meters high. Each gate is capable of lifting 1.5 meters high, which will allow a total of 15 square meters of water passage (10 square meters more than previously), in accordance to IHE UNESCO standards. The existing gates were demolished on December 9, 2014.

The floodgates will allow some easement in  water management from the fresh pond to the salt pond in cases of torrential rain. The ponds are natural basins for water which stream down from the Cul De Sac basin and surrounding hills. Water flows from the fresh pond into the Great Salt Pond, and in the instance of flooding, is pumped out through the Rolandus Kanaal and out to the sea through the passage in the area of Vineyard vicinity.

The floodgates can also allow movement from the Great Salt Pond to the fresh pond under the circumstances of massive flooding as experienced during Hurricane Gonzalo. In such circumstance water would flow reversely and out through the Great Bay Passage until average levels of discharge are reached to the sea and the pond. This will cause waters to settle and not move anymore

The project of floodgate expansion was derived out of the report of IHE UNESCO (International Institute for Hydraulic Environmental Engineering) that was created a few years back as an indication to the Government of St. Maarten for proper water Management that should be initiated at different stages of torrential rain and/or calamities.

The floodgate expansion is one of three components that carries the complete water management proposal of the greater Philipsburg and Cul de Sac basin. The first components were the storm water pumping facilities. Three new pumps were placed in the Great Salt Pond in the span of three years.

The pumps carry a capacity of approximately worst case scenario 87,000 gallons per minute, and at highest capacity, which would be at a maximum of two hours of pumping at high speed, they can carry approximately 140 thousand gallons of water per minute. Each pump carries an amount of water capacity over a sustained period of 1 hour or more.

The second phase of the water management proposal was the expansion of the floodgates, which is the current project under execution. The expansion in accordance to IHE UNESCO will now create a 10 square meters of water passage, which is in accordance to the standards the requirements for a 100 year storm. (storms of particular severity averaged at 100 year turn around according to recorded historic data).

All of the water that travels down in the Zagersgut channel behind the ball field under the Zagursgut bridge will be directly directed to the floodgate. The project is constructed in such a way that the water speed will not exceed the danger limits of more than 3 meters per second. The accumulated water from the hills through that channel is controlled by this new system not to surpass the danger limit.

The third phase is the extension of the Zagersgut trench all the way under the Zagersgut Bridge behind the bird lookout. The trench will make a 90 degree turn towards the floodgate. This phase will be tendered within short, and proposed for construction during 2015, budget permitting.

The completion of all three phases, will present a fully functioning water management system in compliance of IHE UNESCO criteria for the Fresh Pond and the Great Salt Pond.

Commencement of the floodgate expansion project began in November 2014, which consisted of two stages,  allocation of all utilities and commencement of work. The total estimated time frame of execution was set at approximately 3.5 months and was extended with about 2 months to include the extension of the discharge trench with some 40 meters. Now that the floodgates have arrived and are being installed, the balance of the project is predicted to be completed by end of April, which still falls within the proposed timeframe.