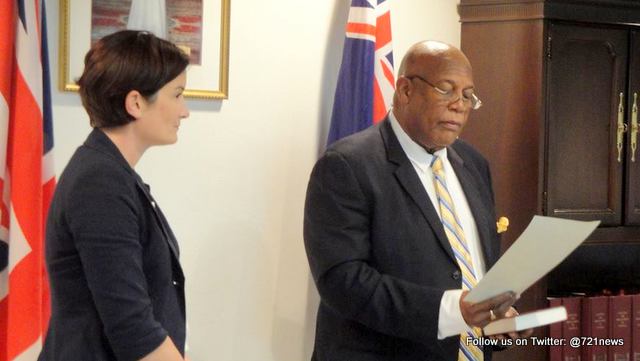 PRESS RELEASE FROM THE GOVERNOR’S OFFICE

HE the Governor Christina Scott has this afternoon, Thursday 23 April, formally sworn-in the new Government of Anguilla in accordance with Section 24 of the Constitution of Anguilla.

Mr Victor Banks, of Valley South has been appointed to the office of Chief Minister of Anguilla. He will be supported in Government by three Ministers: Ms Cora Richardson-Hodge of Sandy Hill, Mr Evans McNiel Rogers of Valley North and Mr Curtis Richardson of Road South. Mr Cardigan Connor of West End has been appointed Parliamentary Secretary. At the ceremony, all appointees made an Oath of Allegiance and Oath for the due execution of office, before receiving their appointment letters from the Governor.

The announcement of individual Ministerial responsibilities will be made on Monday.

At the swearing-in ceremony, the Governor congratulated the Anguilla United Front party for their success at the polls and said that she looked forward to working with the new Government towards the common goal of a prosperous Anguilla. The Governor also took the opportunity to thank all those election officers and members of the police force who had worked tirelessly to ensure a safe and secure election campaign and polling day.

Following the ceremony, the first meeting of the newly formed Executive Council took place in the Executive Council Chamber. Council approved a draft regulation which enabled the Governor under section 4(a) of the Public Holidays Act to prescribe tomorrow, Friday 24 April 2015, as a public holiday in Anguilla.