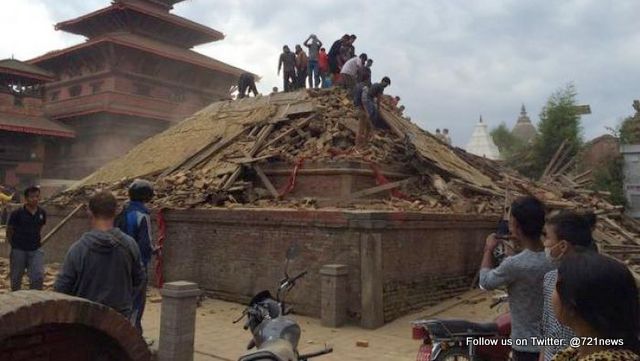 The quake measured 7.9 and struck an area between the capital Kathmandu and the city of Pokhara, the US Geological Survey said.

Tremors were felt across the region, as far afield as Pakistan, Bangladesh and neighbouring India.

A Nepali minister said there had been “massive damage” at the epicentre.

“We need support from the various international agencies which are more knowledgeable and equipped to handle the kind of emergency we face now,” Information Minister Minendra Rijal.

Several buildings, including the landmark Dharahara tower, were reduced to rubble in Kathmandu.

Residents came out into the streets, with mobile phone networks and other communications disrupted.

Injured people have been brought to the main hospital.

There has been no estimate yet on the number of deaths, but Reuters news agency reported that two people had died, one in Nepal, one in northern India.

Indian authorities are responding. “We are in the process of finding more information and are working to reach out to those affected, both at home and in Nepal,” Prime Minister Narendra Modi tweeted.

Aftershocks could still be felt across the region sometime after the initial quake.

In 2011, a deadly earthquake killed at least five people in Nepal. Kathmandu was all but destroyed in the devastating earthquake of 1934.