Saint Kitts — A delegation of nine persons are presently in St Kitts taken part in the 44th Annual Carifta Games. Trainer Les Brown leads a delegation of 6 athletes. Shakeba Pink a student at the Milton Peters College won the first silver medal since 10 10 10 Split, she ran the 3000 and 1500 meters and placed 4th place Raymond Rombley and Leshawn Brown competed in the Octathlon .

Julius Milton took part in the 400hurdles – 800 also Meshack took part in the 200 meters long jump. Herbie Marlin performed reasonable in the triple jump and long jump. Les Brown stated to 721 news “All performed reasonable, they could have done better but fright and nerves had the better of them”. St. Maarten has for the first time succeeded in getting a medal as a country in the games.

This event is seen as the world’s largest youth competition, 28 countries over 1000 athletes.

The delegation will arrive back in St. Maarten today, Wednesday April 08, at 7:00pm. 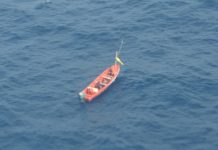