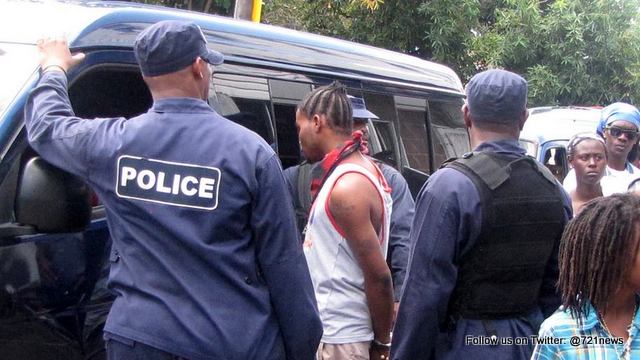 SAINT KITTS — Inspector Lyndon David of the Royal St. Christopher and Nevis Police Force (RSCNPF) represented the Federation at the ‘Reducing Tsunami Risk in the Western Indian Ocean’ conference which was held in Muscat, Oman from the 22nd-23rd of March 2015.

Inspector David stated that “This trip was very informative and educational, and he has gained knowledge which has enhanced his knowledge of tsunamis and the function of the Tsunami Warning Centres (TWC) and Tsunami Warning Focal Points (TWFP). The conference also highlighted the importance and need of early warning systems, and the capability of the responding departments/agencies to disasters; tsunamis.”

Division “B” of The Royal St. Christopher and Nevis Police Force was placed in the spotlight in policing S.P.I.R.I.T.S Black San’ Bang-A-lang.

The event ended without any major incident, however, one person was taken to the police station for possession of Cannabis.

Basseterre, St. Kitts- The Traffic Department is investigating the circumstances by which a fatal traffic accident occurred along the Island Main Road at Johnson Long Path in the vicinity of The University of Medicine and Health Sciences on Monday 6 April 2015 about 6:30 PM.

Initial investigation revealed that motor pick-up PA 6167 owned by Neol’s Courtesy of Farm Estate, Nevis and driven by Ajani Dunrod of West Farm was travelling towards West Farm when the accident occurred. The vehicle had a total of twelve occupants and all were transported to the Joseph N France General Hospital.

Ag Commissioner of Police Stafford Liburd therefore takes this opportunity on his own behalf and the Royal St. Christopher and Nevis Police Force to express condolences to the family members and friends of the late Kervin Bergan.

The Traffic Department takes this opportunity to remind motorist who are transporting persons in open back vehicles of the following:

VEHICLES AND ROAD TRAFFIC ACT, CHAPTER 15.06, section (12)
A driver of a motor vehicle shall not allow the motor vehicle to carry more persons than it was constructed to seat, or licensed to carry.

In resent times the Royal St. Christopher and Nevis Police Force has observed a number person transporting persons in open back vehicles. There is a procedure that has to be followed, and all concerned are ask to contact the Traffic Department concerning this procedure. 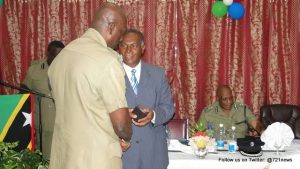 Basseterre, St. Kitts- The Royal St. Christopher and Nevis Police Force (RSCNPF) hosted a farewell ceremony for two (2) retiring senior officers of the force who have contributed to their countrymen’s safety over the last 30 years.

Both officers, who served in several departments of the RSCNPF, gained the support and best wishes from fellow officers, including the Ag. Commissioner of Police Stafford Liburd and the Premier of Nevis, Hon. Vance Amory.

Both the Premier Amory and Ag. Commissioner Stafford Liburd thanked the men for their service to the Federation and Police Force and wished them all the best in their life endeavours.

Ag. Commissioner Liburd added that even though they are retiring, they still have so much to lend to the Police Force. “You don’t lose all those years of knowledge and skill and training that you have received.”

He added that “I hope going forward in the coming weeks and months we can demonstrate to the country, to the people that we can work together in ensuring that we make every effort to reduce crime and violence in the Federation.

Premier Amory encouraged other officers to excel within the force, like the retirees and reach for the top positions to better serve their country. He added “there are opportunities for you… we have pledged to give support to the police and find whatever ways we can to make the performance of your duties as efficient and as enjoyable…”

In response to tributes, Inspector Belgrove indicated that when he entered the force some 30 years ago, it was merely an economic decision, but added that he grew to love the force and the work he did. In closing he told the other officers that policing is not easy and would never be easy.

ACP Liburd stated that he is thankful for the years and training he had within the police force and thanked his fellow officers for their support throughout. He indicated that the RSCNPF will forever be in his prayers, even more through these trying times.

Back ground on Retiring Officers 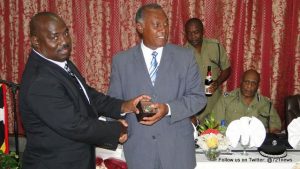 Promoted to Sergeant in 1985

Promoted to Station Sergeant in 1993

Posted as an Instructor at police Training School in 1994

Promoted to Superintendent in 2006

Transferred to Dictrict ‘C’ Nevis in 2012 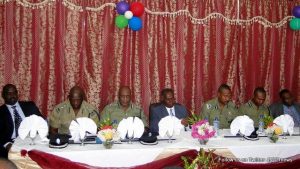 Worked Beat and Patrol at Basseterre Police Station from 1981-1982

Promoted to Corporal in 1987

Promoted to Sergeant in 1993

Promoted to Inspector in 2005

Transferred to Cayon Police Station in 2011

Transferred to Basseterre Police Station as Night Manager in 2012

Transferred to Head of CID Nevis in 2014

Ag. Commissioner of Police Mr. Stafford Liburd therefore takes this opportunity on behalf of the men and women of the Royal St. Christopher and Nevis Police Force to thank ACP Robert Liburd and Inspector Franklyn Belgrove, and their families for their distinguish service to the force and the country as a whole, and wish them success in their future endeavours.