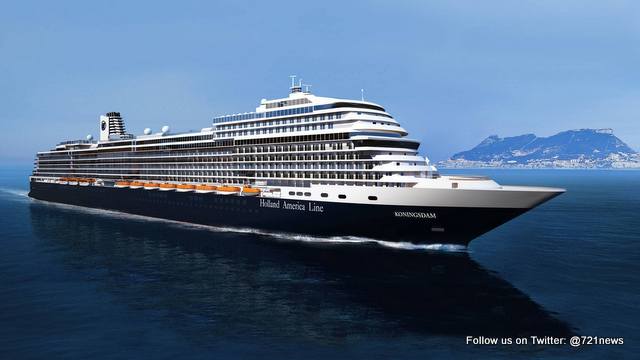 The ship will sail a series of Caribbeanvoyages and one cruise to the Bahamas from November 2016 through March 2017. Koningsdam’s Caribbean itineraries will be available for booking in late spring.

The seven-day cruises will visit popular ports in the region, while the longer nine-, 10- and 11-day itineraries will provide more time for exploring. A four-day cruise to the Bahamas will kick off the Caribbean season. All voyages will be roundtrip from Fort Lauderdale.

Koningsdam will begin its inaugural season in the Caribbean with a four-day cruise to the Bahamas departing November 9, 2016. Following an overnight in Fort Lauderdale, the ship will call at Nassau followed by Half Moon Cay, Holland America Line’s private island.

For the holidays, the December 23, 2016, departure falls over Christmas,Hanukkah and Kwanzaa. The seven-day cruise will visit Grand Turk, San Juan, St. Thomas and Half Moon Cay.

Another nine-day voyage departing December 30 will ring in the New Year. The ship will call at Falmouth, Jamaica; Half Moon Cay; Grand Turk; Georgetown, Cayman Islands; Cozumel and Key West.

The eastern Caribbean takes center stage on the 11-day voyages that depart November 23, 2016, and March 1 and 22, 2017. Koningsdam will visit the ports of Philipsburg; Castries, St. Lucia; Bridgetown, Barbados; Fort-de-France, Martinique; Basseterre; St. Thomas; and Half Moon Cay. Guests aboard also will enjoy scenic cruising in Soufrière Bay and past the famed Mount Pelée volcano.

The inaugural Caribbean season of Koningsdam will be open for booking in April 2015.

Roger Lawrence sworn in as Minister of Tourism, Economic Affairs, Traffic and Telecommunication