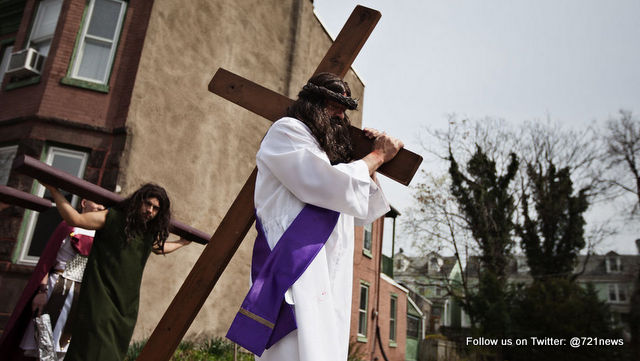 Christians everywhere will be celebrating Good Friday on April 3, 2015. Here’s more on the solemn religious holiday.

What is Good Friday?

Good Friday is a Christian holiday held in honor and remembrance of Jesus’s death on the cross. It is held after Maundy Thursday, which recalls the Last Supper, and on the Friday before Easter Sunday.

That’s morbid. How is that a holiday?

For Christians, Jesus’s death is one of the most important parts in the Bible. In dying, Christians believe Jesus took on all the sins of the world and thus it is only through his death (a perfect sacrifice), that we are redeemed and allowed to enter into heaven.

That’s okay, because Jesus’s death is really, really gruesome. Crucifixion is one of the most pain ways to be killed and was reserved for the worst of the worst in Roman times. In fact, it was so bad that we get the word “excruciating” from the Latin term “cruciare,” or, to crucify.

Jesus was nailed to and hung on the cross – but what kills you when you are crucified isn’t bloodless. It’s caused by exhaustion or heart failure. If people were feeling kind, they would shatter your legs and you would then die of asphyxiation.

Jesus was also, according to the Gospels, beaten, flayed and scourged prior to his crucifixion and was so weak that he could not carry his own cross.

How do you celebrate Good Friday?

Good Friday is meant to be a day of reflection for Christians, a day when you focus on the sacrifice Jesus made. It is also a day of mourning for the church. Many churches also participate in Veneration of the Cross, a short ceremony in which Christians kneel before the cross and affirm their faith.

Good Friday services also typically feature a reading of the Passion, which is the story of Jesus’s death.

So it’s a really depressing day.

Depends on how you look at it. If you are Christian, you believe that Good Friday recalls the day your sins were forgiven.

Also, you have to have Good Friday to get Easter. Rising from the dead just isn’t as much of an achievement if you never die in the first place.

A version of this story was published in 2014.