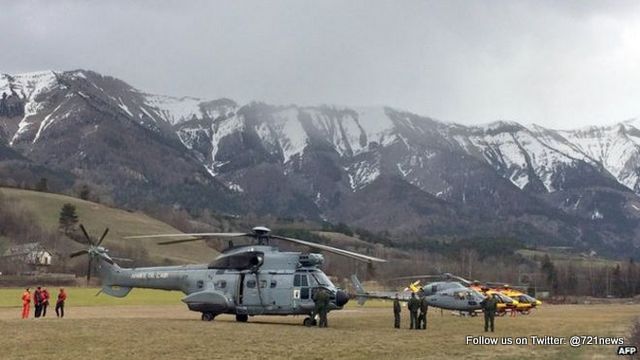 FRANCE,  – An Airbus A320 airliner has crashed in the French Alps between Barcelonnette and Digne, French aviation officials and police have said.

The jet belongs to the German airline Germanwings, a subsidiary of Lufthansa.

The plane, flight 4U 9525, had been en route from Barcelona to Duesseldorf with 144 passengers and six crew.

No one is expected to have survived, French President Francois Hollande said. He and German Chancellor Angela Merkel have spoken of their shock.

“This is the hour in which we all feel deep sorrow,” Ms Merkel told reporters, adding that she was planning to travel to the crash site.

Speaking earlier, Mr Hollande said the “conditions of the accident, which have not yet been clarified, lead us to think there are no survivors”.

He described the crash as a tragedy, adding that it had taken place in an area that was hard to access.

Several German newspapers are reporting that the passengers included a German school class on its way back from an exchange trip.

Sandrine Boisse, a tourism official from the ski resort of Pra Loup, told the BBC that she had heard a strange noise in the mountains at around 11:00 (10:00 GMT).

“At first we thought it was on the ski slopes, an avalanche, but it wasn’t the same noise,” she said. “I think it was the noise of when a plane goes very quickly down.”

Spain’s King Felipe, on a state visit to France, thanked the French government for its help and said he was cancelling the rest of his visit.

Earlier reports, quoting the French interior ministry, said the plane had issued a distress call – but this has been contradicted by an aviation official quoted by the AFP news agency.

Although it began its life as an independent low-cost carrier, Germanwings is wholly owned by its parent Lufthansa.

It operates increasing numbers of the group’s point-to-point short-haul routes and takes many passengers from German cities to Mediterranean sunspots.

The airline has an excellent safety record with no previously reported accidents. The average age of its Airbus fleet is just over nine years old, though flight 4U 9525 was a 24-year-old A320.

The plan was to phase out the Germanwings brand and replace it with Eurowings.

There has been a longstanding dispute with the Vereinigung Cockpit union over early retirement. Pilots went on strike for three days around this time last year.

French Prime Minister Manuel Valls said he had sent Interior Minister Bernard Cazeneuve to the scene and a ministerial crisis cell had been set up to co-ordinate the incident.

Spokesman Pierre-Henry Brandet told BFM TV that it would be “an extremely long and extremely difficult” search-and-rescue operation because of the remote location.

Lufthansa chief executive Carsten Spohr tweeted: “We do not yet know what has happened to flight 4U 9525. My deepest sympathy goes to the families and friends of our passengers and crew.

“If our fears are confirmed, this is a dark day for Lufthansa. We hope to find survivors.”

The Airbus A320 is a single-aisle passenger jet popular for short and medium-haul flights.