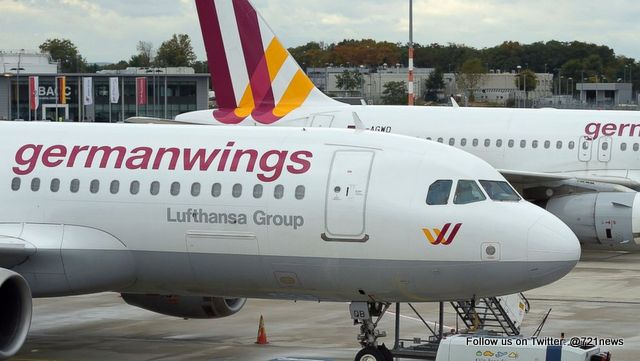 – 11:12 a.m. ET: Francis Hermitte, the mayor of France’s Seyne les Alpes, told CNN that he has not heard anything about a “moving body,” as a Spanish newspaper reported.

– 11:12 a.m. Michel Suhubiette, a mountain guide in France, said he heard a plane fly at alarmingly low altitude shortly before the crash.

By Tuesday afternoon, at least a dozen police, military and fire department helicopters were flying in and out of where the Germanwings plane is thought to have gone down, according to Suhubiette.

Helicopters would be the only way to get to the purported crash site, though getting there may be tough. Suhubiette said clouds were coming into the area, and bad weather is forecast for Wednesday.

– 10:30 a.m.: Air traffic controllers sent out a distress signal after controllers became concerned at the loss of radio contact with the doomed Germanwings plane and the speed of the plane’s descent, a spokesperson for the French civil aviation authority said. The crew of the plane did not issue a distress call before crashing in southern France, the spokesperson said.

– 10:20 a.m.: Those on Tuesday’s fallen Germanwings plane include 67 German citizens, but “this figure may change” when the passenger list is checked with relatives, according to airline CEO Thomas Winkelmann.

– 10:11 a.m.: The aircraft last had contact with French radar services at 10:53 a.m., according to the Germanwings executive. Germanwings Flight 9525 had left Barcelona airport at 10:01 a.m., the airport website said.

The captain of the downed plane had flown for Germanwings for more than 10 years, and had more than 6,000 flight hours on this model of Airbus.

A Germanwings Airbus A320 plane crashed Tuesday in the foothills of the Alps in southeastern France with at least 150 people on board, according to Germanwings managing director Oliver Wagner.

French Prime Minister Manuel Valls told reporters he fears all those aboard the flight from Barcelona, Spain, to Dusseldorf, Germany — 144 passengers and six crew members, according to Germanwings — may be dead. Germanwings CEO Thomas Winkelmann said there were two babies on board the flight. It was not clear whether they were included in the 144 passengers.

“The conditions of the accident are not yet clear but lead us to believe there will be no survivors,” Hollande said.

Spain’s King Felipe VI, who cut short a state visit to France as news of the crash broke, said there was a “high number of Spaniards, Germans and Turks” on the doomed Germanwings flight.

Spanish Prime Minister Mariano Rajoy tweeted that he will return to Madrid, put together a “crisis team” and send a minister to France.

Relatives of those believed to be on the flight, fearing the worst, have started to gather at Barcelona airport, where a crisis center has been set up.

German Chancellor Angela Merkel said Tuesday that “we don’t know much about the flight and the crash yet. And we don’t know the cause.”

Merkel said that she’s been in touch with France’s President and Spain’s Prime Minister, with all agreeing to “help each other in any form.”

There were “many” Germans on the plane, she told a news conference, adding that the suffering of the families concerned was “incredible.” “We have to think of the victims and their families and their friends,” she said.

Merkel said she was sending two ministers to France on Tuesday and would travel to the crash site on Wednesday to see it for herself.

German Foreign Minister Frank-Walter Steinmeier said the German government had set up a crisis center in response to the “terrible news” and was in close contact with the French authorities.

“In these difficult hours, our thoughts are with those who have to fear that their close ones are among the passengers and crew,” he said.