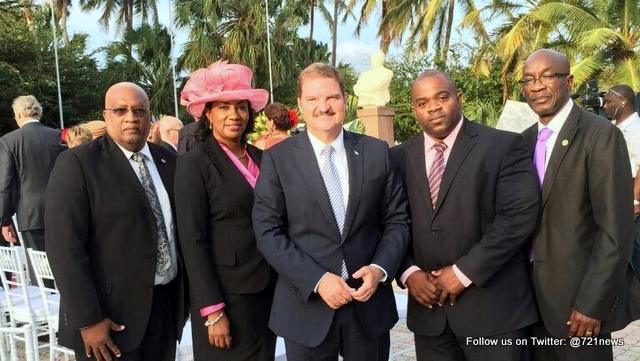 ORANJESTAD, Aruba – MPs Jacobs, Emmanuel, Pantophlet and J. Leonard accepted the invitation of the Parliament of Aruba to attend their celebrations on the occasion of the anniversary of the Dia di Hymno Y Bandera di Aruba held on March 17 and 18 this week.
The commemorative ceremony of their path to the freedom to self govern within the Kingdom was highlighted with historical facts, wreath laying, singing of the National Anthem and other songs to commemorate the flag and history of Aruba and its people.
A cultural manifestation featured winners of national poetry contests and national pride songs all written, arranged and performed by Arubans, especially the Youth. What was missing was a certain flair or aspect attributed to San Nicholas where many Windward Islanders and other migrants settled decades ago.
The official ceremony on Aruba Day March 18 featured speeches, music and dances by the youth and other cultural groups as well as a parade featuring uniformed groups, sport teams, cultural groups, clubs, community groups, equestrian, and vintage automobiles.
It was a great to experience how Aruba celebrates its National Day, however MP Jacobs noted that the lack of participation by the opposition at a National Celebration was a disappointment. The MP saw this as an opportunity to meet, greet and share ideas with our sisters and brothers with whom we share a connected history on the island