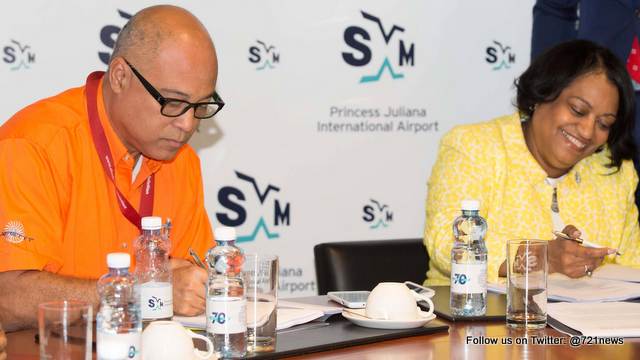 SIMPSON BAY, St. Maarten (Thursday, March 19, 2015)— Twenty-five years after the first call was made for a Fixed Based Operations (FBO) facility, the Princess Juliana International Airport, SXM, and TLC signed an agreement that places the island on the threshold of building a modern, state-of-the-art Terminal for the General Aviation sector.

“In 2013 and 2014, we had to turn away 67 and 58 requests respectively for parking of private jets. These aircrafts had to go to other airports, and it may become even more difficult to attract them to return to SXM if we do not modernize our FBO facility as soon as possible,” LaBega said.

According to her, the agreement “represents another major step in the realization of the new FBO facility, which forms an important part of our Capital Improvement Program for which SXM Airport obtained financing on the international market.”

“It means that the new facility is guaranteed of the continued services of the two major FBO operators at SXM Airport,” LaBega continued, indicating that SXM recently signed a similar non-exclusive agreement with Arrindell by Signature to operate in the new facility. Both operators, she said, will offer passenger, ground handling and into plane fuel services for General Aviation (GA) from the new FBO Terminal.

“This agreement also means that the SXM Management Team has done its part in an open, transparent and fair manner in accordance with all the standard integrity measures required of an international airport like ours,” LaBega stated, pointing to the fact that the bidding process started in December 2014.

Emphasizing that the necessary “permits and authorizations” for the relocation of the Met Office as well as the Civil Aviation Authority of St. Maarten need to be granted “post haste so that this project can take off without any further delay,” LaBega said: “I know the FBO operators are eager to start building their lounges with additional services and amenities at the new facility as agreed. SXM Airport is also anxious to begin the construction of the new facility immediately so that within the next 16 months, the project can be completed as initially planned.”

She praised the vision and efforts of TLC and Signature by Arrindell, the two main FBO operators who will continue to offer their services in the new facility and said both were responsible for the General Aviation sector’s success, which has made SXM number two in the region, behind only The Bahamas.

“Growing a sector like General Aviation from scratch, through dint of hard work, professionalism, commitment and dedication is not easy in this very competitive industry where other destinations have the advantage of unreserved government support,” LaBega remarked.

In an impromptu address, TLC managing director, Steve Kong gave a brief historical background of the development of the General Aviation sector on the island, going back to the “late ‘80s and early ‘90s,” when it was championed by Roy Mingo, now of Signature by Arrindell and TLC’s Kenneth Kong.

“Twenty-five years later, we will have a brand new FBO facility,” Steve Kong said, adding that “If we get additional parking as has been promised,” St. Maarten’s competitive industry edge in the region will increase even more significantly.

Kong said, pilots especially love St. Maarten and advise their wealthy clients to come here even when they want to go elsewhere.

“What we’re going to build at the new FBO Terminal will make St. Maarten proud,” he said.

Following the signing of the agreement, Gary Matser, chairman of the Supervisory Board of Directors of SXM Airport gave a brief toast and congratulated all those who made the agreement possible.