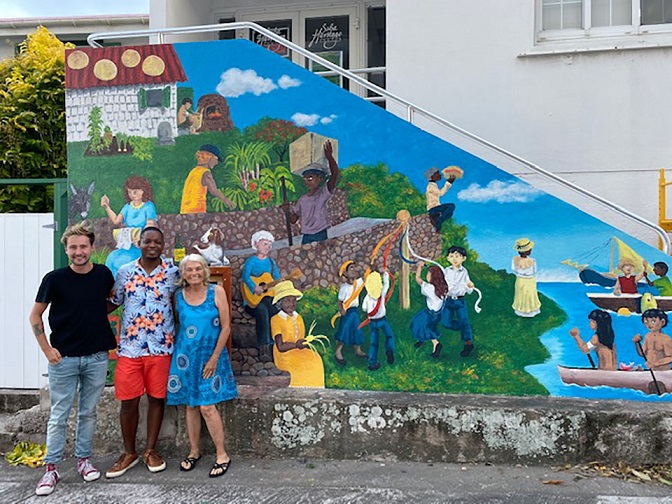 SABA — A large, colorful mural is now beautifying the wall at the entrance of the Saba Heritage Center in Windwardside. The mural was painted by artist Joan Bourque and designed by archaeologist/artist Finn van der Leden.

The 3 by 5-meter mural depicts Saba’s heritage, both tangible and intangible. It includes Saba’s important historic dates such as the abolition of slavery and elements of the Indigenous culture from the past up to today, such The Road, Saba Spice, Saba Lace, hat making, the Maypole Dance and fishermen.

Inspiration for the design of the mural itself came from Saba’s steep slopes, whose form is similar to that of the wall. Although not every aspect of Saba’s rich history could be captured in only one mural, care has been taken to include a full range of people, ages and activities. The historical accuracy of the depicted scenes came from resources in the Heritage Centre, but also from the many Sabans who were kind enough to review and comment on the design.

“We were looking for something unique, something that would stand out and act as an eye catcher for the Heritage Center,” said Treasurer of the Saba Archeological Research Center (SABARC) Vito Charles, who together with Chairman Jay Haviser and Secretary Peter Johnson forms the SABARC board.

Charles explained that the idea for a mural actually came from archeologists Corinne Hofman and Menno Hoogland during their recent visit to Saba. Hofman and Hoogland have many years of experience of archeological research on Saba and throughout the Caribbean. Borque, who is well-known for painting the mural at Fort Bay harbor and at the Eugenius Johnson Center, completed the mural within one week.

The Heritage Center has as mission to preserve, document and disseminate information about Saba’s heritage. The Saba people and their knowledge about heritage play an important role in this. “We want to do this by engaging people to tell us what they consider to be Saba’s heritage,” said Charles, who announced that in a few months, a new research and heritage coordinator will be coming to the island who will primarily engage with the population to gather and preserve information on Saba’s rich history.