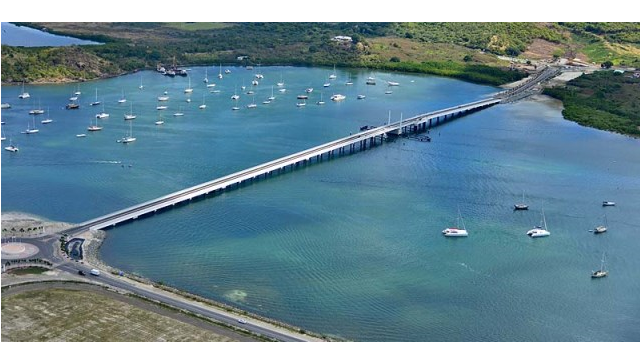 PORT ST. MAARTEN – The Causeway Bridge on Wednesday morning was put back into operation for maritime traffic after experiencing some technical challenges.

The Simpson Bay Lagoon Authority (SLAC) first opened to maritime traffic at 10:10 AM on Wednesday.  SLAC is confident that this problem will not happen again.

Technicians from Hollandia in the Netherlands arrived on the island Monday after a flight delay and worked all day on Tuesday and into Wednesday to carry out the necessary repairs to the hydraulic system where faulty sensors were replaced.

Testing of the various electronic operational equipment was carried out in the early hours of Wednesday leading to a successful bridge opening operation later in the morning.

Port St. Maarten Group (PSG) Chief Executive Officer (CEO) Alexander Gumbs would like to thank the PSG and SLAC teams who worked diligently trouble shooting the issues, and Hollandia technicians for their invaluable job to resolve the problem.

Gumbs would also like to thank maritime operators, boat owners, and the community for their patience in seeing through the successful resolution of the technical challenges that were experienced with the Causeway Bridge.

The Causeway Bridge which was opened in late 2013 to vehicular and maritime traffic utilizes complex advanced technology when compared to the Simpson Bay Bridge.