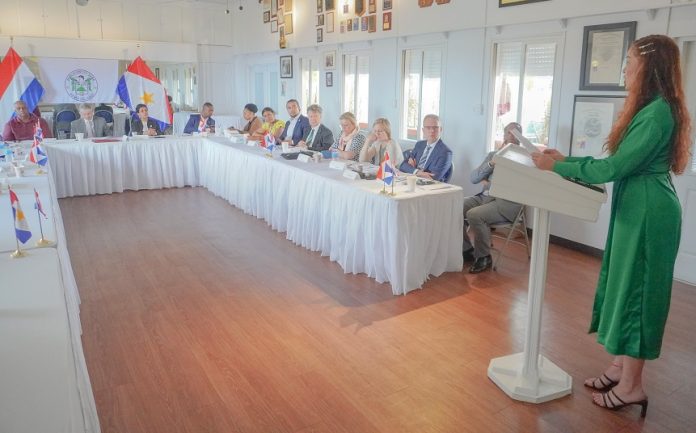 SABA — Esmeralda Johnson, who at 21 was the youngest person to ever take seat in the Saba Island Council in March 2019, announced on Monday, May 2 that she has decided not to run in the elections in March 2023, not because she is disappointed in the WIPM party, but mainly because of The Hague.

“I have not seen any structural change on various topics, despite my best efforts. I feel powerless as an Island Council Member,” she said in a speech during a meeting of the Island Council with the delegation of the Dutch Parliament that was here on Monday.
“After graduating from college in the US, I decided to come back and give back to my island and my community. Early on I realized that we are truly paying the price for living in paradise. Persons talk to me about their banking problems, the issues with notarial services or the lack thereof, about the challenges in healthcare, mental healthcare, justice and much more. All of these topics I have no control over, or say in,” she said.
According to Johnson, there is a difference in how the Dutch Government treats Saba residents compared to those living on Bonaire, St. Eustatius and in the rest of the Netherlands. She said that other than the talks with the Dutch Parliament, the many letters, research and lobbying in The Hague, she felt that there was not much she could do for her community on the many unresolved issues that affects people’s lives.

Deserve more
“My people deserve more than this. I see how much Saba has been developing and how it truly was the best decision to be a direct part of the Netherlands, but it also feels as if The Hague just does not seem to care enough to solve big structural problems that our government and our community are faced with.
How equal are we in all actuality and who is paying the price? Our people are paying the price,” she said.

“Saba is paradise. But I see my people pay the price in each healthcare referral that goes wrong. In each young professional that cannot further herself or himself in life because there are no or little opportunities. We pay the price for having no real working economy. And all those young entrepreneurs and local businesses pay the price for no or poor facilitating infrastructure to work with. The banking services are poor and costly. Notarial services are non-existent.”

Divisive language
Referring to something she heard another politician say, “Nobody can love Saba more than a Saban,” Johnson said that this kind of “divisive” use of language was not conducive as it excluded almost half of the residents. “I find we all can and should love Saba. It’s a beautiful place with a beautiful diverse community for which we should all want the best.”

Johnson lamented the harsher sentiments within the community, also the fact that divisive rhetoric such as the statement by another politician was becoming more normal. “Because The Hague is not solving our structural big problems, and because the local government is not empowered to solve them either, there is more room for radicalized opinions, polarization and hardening opinions towards both the local government and the national government.”

Persistent challenges
The Council lady pointed out that Saba faced persistent challenges of poverty, inequality, systemic problems and climate change. “People struggle to make ends meet because the social minimum is not at a fair level and the high cost of living. People are disempowered due to poverty and the lack of access to basic services. Healthcare, on-island and off-island transportation, livable wages, pensions and other welfare and care-related rights and benefits should be equal to the Netherlands.”

As people’s representatives, Island Council Members and Members of the Dutch Parliament share the same goal to build a sustainable world that provides benefits to the people, Johnson said. “Within the Dutch and the Saba Government there are many people with good intentions. I have lobbied and fought for structural change, together with my wonderful colleagues, but sadly in my years as Island Council Member, the needed structural solutions from The Hague have been lacking. My main message to you is to please use your voice and your seat to truly be the change that my people and my community needs and deserves.”

Well-received
Johnson’s speech was well-received by the Dutch Parliament delegation. “You left us speechless. Thank you for your proud and powerful message. Sharing your inner thoughts takes guts. Politics needs people like you. You can rest assured that we have listened to you and that we will take your message back to The Hague,” said delegation leader Mariëlle Paul, who chairs the Second Chamber’s Permanent Committee for Kingdom Relations.