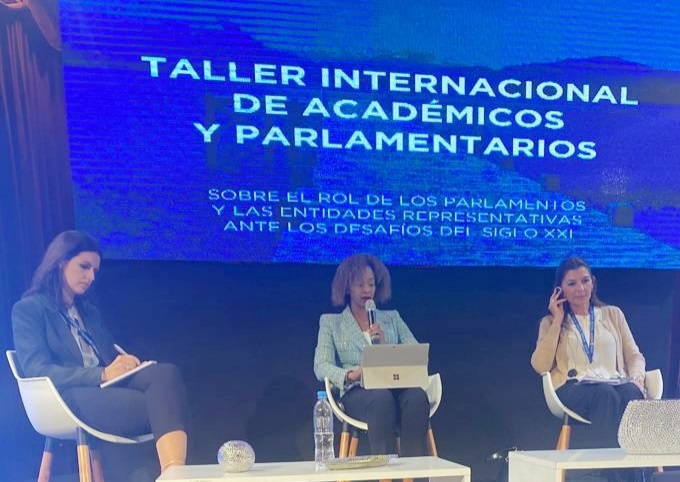 ARGENTINA — As the Chairlady of the Committee of Education, Culture, Youth and Sports Affairs, Member of Parliament Angelique Romou recently participated in a panel discussion in Argentina where she spoke extensively about challenges that we are faced with as it pertains to education in the 21st century.

MP Romou started by expressing gratitude to the Deputy Director of the International Centre for Parliamentary Research and Prospective studies of the University of Austra in Argentina, Mr. Juan de Dios, for inviting her to be a speaker on the panel of Education and Parliaments. It was the first-ever international workshop of scholars and parliamentarians to be held in Latin America and the Caribbean.

The MP highlighted the fact that though times have changed, not much has changed in our educational system as it pertains to meeting the specific needs of children. Meeting the needs of children would allow them to flourish in today’s society, whereas not meeting their needs may have an adverse effect and cause them to be lost or go astray. MP Romou said that Parliaments all over the world can have a major impact on creating the much-needed diversification in education by applying and making amendments to laws.

“ In doing research, which was primarily done by seeking the opinions of our youth, I received and combined some very interesting points as it pertains to Education and the importance and value of it”, said MP Romou.

MP Romou stated to her fellow panelist that she believes that they can all agree that without an education system, many would not learn the basics such as reading, writing, math, etc. She went on by stating that through social interaction at school, children can foster new friendships and decipher wrong from right. Having the opportunity to learn different subjects in school also helps students decide what they would like to be when they grow up as they get the feeling of what they are interested in and what they are not interested in.

Even though MP Romou highlighted the positive attributes of going to school, she insisted that school systems are failing our students. This is the area that MP Romou focuses on as a Member of Parliament and an advocate for the positive development of our youth. The MP stated that Parliamentarians should advocate for positive change.

“In my opinion, the approach taken when it comes to school is too streamlined and is limited in individuality and creativity. School isn’t creative enough; there is often only one way of doing things and many times the focus is primarily on that one way. While a student may figure out multiple ways to get to the same result, focus is paid to the one way the teacher is teaching and not much attention is paid to the student’s creative ways of finding the same answer and in some cases, they are penalized if their way isn’t the teacher’s way.

“With all that we are exposed to, we should be allowing our children to thrive in this modern world of technology, but yet there are way too many outdated methods being utilized in schools, not allowing our modern-day children to fully benefit in a technological world”, said MP Romou.

The MP however highlighted the current technology project being implemented by the Ministry of Education, Culture, Youth and Sport – the iSTEP program, in which she was able to see firsthand the benefits and strides of this program when it comes to implementing technology in education and prepping our students with 21st-century skills. As the program caters to empowering our young people with technology.

However, the concern of the MP is the lack of continuity and sustainability when government changes, which can hinder such great projects from continuing on their trajectory. Therefore having our laws amended to reflect the need for incorporating technology in our educational system is important, no matter the change in legislators or changes in the executive branch.

Another member of the media asked: “ Considering the importance of education, does your national budget adequately address the educational needs of your people?”

MP Romou replied that education forms the largest part of our national budget. However, there are still inadequacies our educators are faced with. For example – the lack of school materials. We have passionate educators that go out and make it happen in order to get the school materials that they need and I have also experienced this as an educator myself. The MP then further elaborated in a follow-up answer on her amendments made to the budget to increase the amounts for school materials in public schools to help alleviate this burden on educators.

MP Romou ended her speech by stating that we need an education system that fosters and breeds a new generation of confident leaders who are versed in their God-given talent and not programmed to be like everybody else. We need to legislate change that equips our youth for the new generation of learning which will not only promote excitement for learning but learning which explores all possibilities of innovation and creativity.

MP Romou thanked the organizers for extending the invitation and for covering the costs in Villa La Angostura, Bariloche Argentina. “This Opportunity awarded her a great platform to discuss amongst Scholars and other parliamentarians the challenges we are faced with in Education in the 21st century which are not only issues in St. Maarten but the world over. MP Romou stated that many follow-up discussions were held after her panel and that invitations to view the educational vision of other countries as well as invitations to join various organizations were extended. MP Romou stated that she will provide the information on these discussions and the organizations, in a follow-up press release.

MP Romou also invites everyone to visit her Facebook and Instagram page “MP Angelique Romou”, to see and listen to the panel discussion.