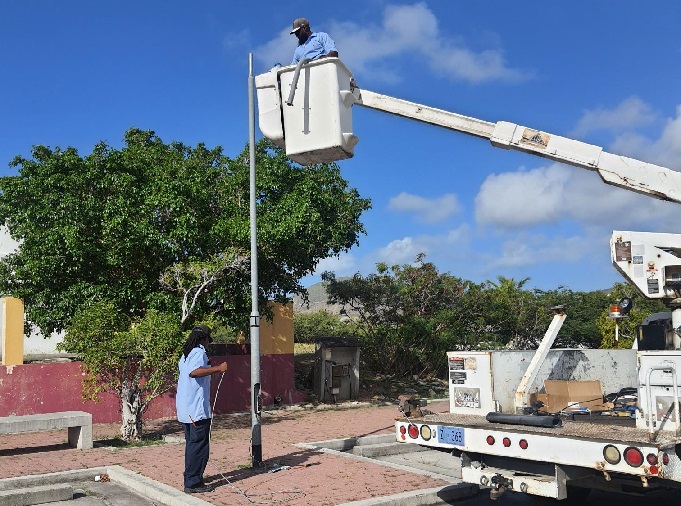 NV GEBE is working with the Ministry of Public Housing, Spatial Planning, Environment and Infrastructure (VROMI) as we carry out intense repairs and refurbishing to the streetlight network throughout the island. The street light network of St. Maarten, while managed by NV GEBE, is owned by the Government of St. Maarten and falls under the direct responsibility of the Ministry of VROMI. In February 2021, NV GEBE Management and the Honorable Minister Doran signed the updated and renewed Streetlight Management Agreement for a period of four years.

The four-year agreement requires NV GEBE as concession holder, to install and maintain the streetlight network and to carry out all necessary works involved in accomplishing the intention of the streetlight agreement. The works range from changing out fixtures, replacing damaged cables and defective parts, trench work and expansion of the network.

NV GEBE Distribution Department is the custodian of the agreement and is tasked with ensuring the optimal functioning of the streetlight network on behalf of management. NV GEBE recently carried out a complete assessment of the network and as a result a short-term plan was put together to tackle the deficiencies revealed in the assessment. Stock, along with special equipment and SMART devices have been ordered to allow NV GEBE to further optimally manage and oversee the system, remotely as well as on the spot.

Visual inspections and change out of sensors, fuses and bulbs, where necessary, were carried out last week. NV GEBE electrical technicians could be seen in all the various districts executing systematic inspection of the street lighting. The change out of defective parts in the streetlighting network was also carried out in all neighborhoods and primary roads, at the same time of the inspection and was completed according to our four-day schedule. The material should arrive within short as it relates to trenchwork, cabling, change out of fixtures, arms, and poles, where maintenance is required, NV GEBE will then execute the repairs immediately.

NV GEBE understands that residents are eager to have the street lights of the various primary roads and neighborhoods functioning and management is, therefore, assuring residents that the matter has its fullest attention. Interim Director of NV GEBE, Mr. Merrill Temmer stated that “The safety of residents and visitors is paramount, and having adequate lighting throughout the areas is of great necessity.” Mr. Temmer added that NV GEBE will continue to upgrade the street lighting infrastructure and thereby the consistency of the network.”

NV GEBE will be keeping the public abreast by communicating the maintenance schedule and hereby request the public’s cooperation and understanding as we execute systematic inspection and maintenance of the streetlight.