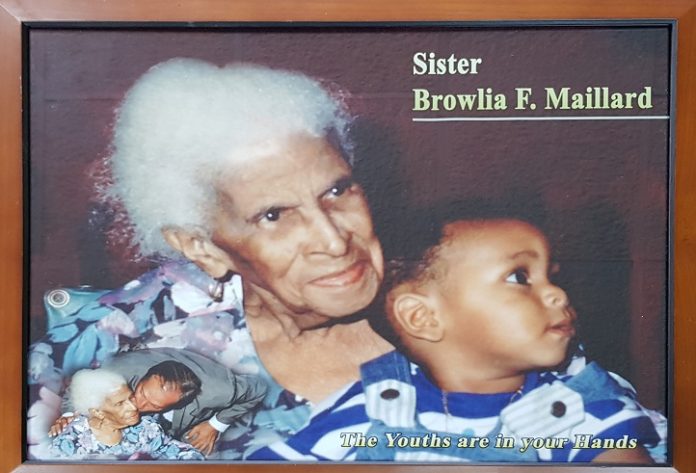 PHILIPSBURG – In the spirit of Black History Month and as Sint Maarten continues to acknowledge its rich, and diverse heritage, the Ministry of Education Culture Youth and Sport (MECYS) is unveiling “We Story” The Collection. “We Story” is a compilation of newly and previously written profiles/features (by cited & acknowledged authors) on prominent and well-known past and current educators, artists, sports icons and community pioneers that have contributed to Sint Maarten and its diaspora.

In this feature, written by the late Neville York former Department Head of Culture, which appeared in the St. Maarten Cultural Calendar 2013, focus will be placed on the contributions of Ms. Browllia Florencia Maillard.

“God has given us many treasures over the years. Along came a teacher, not any ordinary teacher but a “Special Teacher” who stood out stately as a palm tree blowing in the wind of our minds. All students who were genuinely touched by her had one common thought of their teacher student relationship; “she took time with us, molded our minds so patiently, she instructed by example and gave her time unselfishly. At times, she was more than a teacher: she was a “Special Teacher”.

The late Browllia Florencia Maillard known as “Teacher”, touched many and helped to shape the lives of hundreds of children during her lifetime. She was a nurturer, a mother figure, a motivator, a disciplinarian, a teacher and a pioneer in the field of education. In everything that she did, her love, particularly her love of children was evident.

Ms. Browllia was born on St. Maarten on January 21, 1902. Ms. Browllia was a kindergarten teacher. She taught for 26 years. In 1920, she started the school that later became known as the Princess Beatrix Kleuter School. Located in the Brick Building on the grounds of the Methodist Church. That school is today name the Methodist Agogic Centre. Ms. Browllia was more than just a teacher, she was a philanthropist. She managed the school with her own money for many years. She was a volunteer and received no salary. Thelma Gumbs, the former Superintendent of the Sunday School at the Methodist Church, said in an interview that Ms. Browllia would send her own money to her sisters who lived in the United States, and her sisters would purchase material for her to use in the school. She made sacrifices like that, because she truly loved children and wanted to ensure that they would receive a good education. Ms. Browllia taught two kindergarten grades, Little Chick and Big Chick. Once a student completed Big Chick, they were ready to enter the first grade.

Ms. Browllia’s contributions to the field of education did not go without recognition. Princess Beatrix honored Ms. Browllia by attending a ceremony and laying the first brick, which symbolized the beginning of construction of the Princess Beatrix Kleuter School. Ms. Browllia also received a Royal Decoration from Queen Juliana. Ms. Browllia has also been paid tribute by the Methodist Agogic Centre that has a campus on St. John’s Estate named in her honor. Ms. Browllia is a true St. Maarten heroine, with a legacy that will continue to inspire generations to come.”

The Ministry of Education Culture Youth and Sport (MECYS) will continue to add to the collection as information is researched and compiled from new and historical sources.