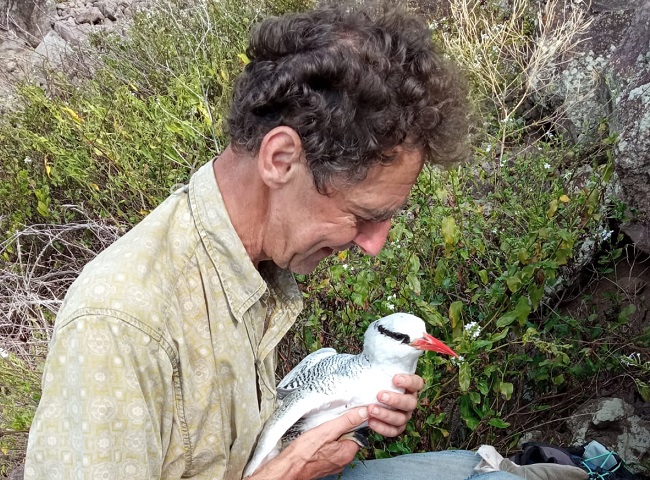 SABA — With the assistance of numerous residents, Lara Mielke has been researching the Tropicbird on Saba, specifically the nesting places and foraging grounds of these iconic, endangered seabirds since last year. Since a few weeks, tropicbird expert Michiel Boeken has joined the project, but also came to Saba to ring the birds that are nesting here. Boeken has helped Mielke a lot in the preparation of the project.
Mielke, who is originally from Germany, came to Saba with her partner Tom Wijers who is part of the sea urchin research project of the Van Hall Larenstein University of Applied Sciences and the Saba Conservation Foundation SCF. “I wanted to do something useful while I’m on Saba,” said Mielke.

Mardik Leopold, one of the previous researchers of the tropic bird on Saba, was Mielke’s study mentor at Van Hall Larenstein, the school where she studied Wildlife management before her Master International Nature Conservation in Germany and New-Zealand. “Mardik suggested doing research on the Tropicbird on Saba.” So, she got in touch with Boeken and with biologist Hannah Madden on St. Eustatius who has done a lot of research on the Tropicbird on the neighboring island. Madden and Mielke wrote a proposal for the Dutch Bird Protection Foundation Vogelbescherming Nederland and the Prince Bernhard Culture Foundation to get funding for an independent project. This project includes investigating the foraging grounds by tracking adult tropicbirds with GPS loggers and increasing the awareness for this species by involving local residents in the fieldwork. In June 2021, she arrived on the island where she would be spending five to six months on researching the Tropicbird on Saba.

Important location
“Saba is a very important location for this species. Saba is one of the few islands in the Caribbean where the Tropicbird comes to nest and to rear its chick.” An estimated 17 percent of the global population of tropicbirds is believed to nest on Saba and Statia, of which the majority on Saba. It is estimated that up to 1,500 breeding pairs nest on Saba and approximately 400 on Statia.
There are three tropicbird species in the world. The Red-billed Tropicbird is the largest of them, but has the smallest population of 8,000 to 15,000 breeding pairs worldwide. The Tropicbird is endangered and is threatened by predators like (wild) cats and rats which eat the single egg or the chick, which results in the number of birds diminishing. The (wild) cats on Saba are a serious problem for the Tropicbird.

Steep cliffs
Mielke has been monitoring the nest locations in often steep, hard to reach cliffs at Tent Bay, Old Booby Hill and Great Level in order to find suitable nests for the attachment of GPS loggers on adult birds, a practice that she learned during a course in St. Eustatius. The GPS loggers are attached when the parents are guarding their young chick. During this process, Mielke also checks whether the birds have a ring on their leg. Some birds have already been ringed by other researchers like Boeken and Leopold. Ringed birds provide information on survival and population structures which is important for future conservation efforts.
At the nesting sites Mielke also collects data about the diet of the birds which can then be linked to the GPS data. “These birds stay at sea for days. They forage very far, also to places where they are not protected. By placing GPS loggers on them, we can register where they go and we can consider whether these areas need to be protected as well,” said Mielke.

Foraging grounds
Madden has already done a study on foraging patterns of the Tropicbird on Statia. Since there are indications that tropicbirds of the different islands have different foraging grounds the question is where tropicbirds from Saba forage. The GPS information can shed more light on this indication. The GPS research will last about three months.
Mielke said that next to regularly joining field assistants Helena Boehm, Eva de Vries and Gina Conley, many people on the island have assisted her with her field research. She said that the residents’ involvement increases the awareness for the protection of the Tropicbird. In October last year, Mielke gave a well-attended talk at Sea & Learn. Mielke loves working on Saba. “The fieldwork is exciting, challenging and adventurous. Saba is a truly beautiful and very special island.”