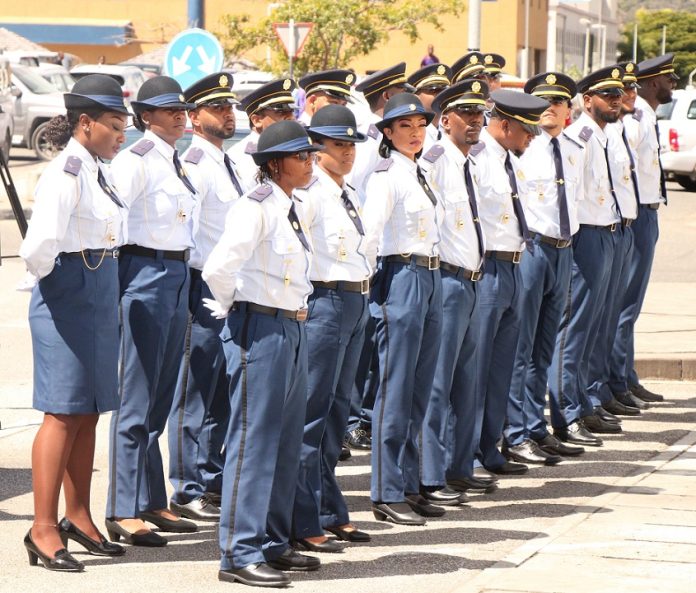 PHILIPSBURG, Sint Maarten — Eighteen enthusiastic new police officers of the Class of 2019 took their oath in front of Minister of Justice Anna Richardson at a ceremony held on Friday in front of the Walter R. Kramers Building (Philipsburg Police Station). They received their diplomas from Mr. De Boer and R. Appelhof of the Netherlands Police Academy, and had their epaulettes changed from that of a cadet to officer by family members.

Governor Eugene Holiday, Prime Minister Silveria Jacobs, Richardson, new Chief Prosecutor Hieke Buist addressed the graduates and wished them all the best on their chosen path. They thanked the graduates for answering the calling to work in the judicial field.

Chief of Police Carl John, the other KPSM management team, and representatives of the Dutch Police Academy also congratulated the graduates and expressed heartfelt thanks to family members for their support of the officers during their training.

A new batch of recruits will commence the same intensive training (BPO-5) as of March 1, 2022.

By undertaking this new training methods, KPSM aims to further raise its personnel to the highest possible level and lay the foundation for a professional police force that meets the highest standards

The ceremony was also attended by Members of Parliament, other members of the Council of Ministers, government department heads, representatives of various associations and communities, fellow colleagues, relatives, and friends.

KPSM management team thanks the ceremony organizers and expressed gratitude to extended to the Department of Communication and “Your Vision Production” who made it possible for the ceremony to be viewed live via the Police Facebook.