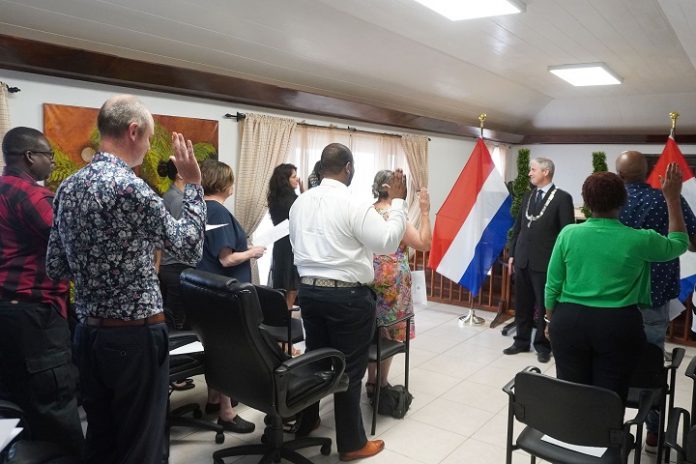 SABA — Fourteen civil servants of the Public Entity Saba on Monday, May 10 took the oath of office. Lucia Woods of the Human Resources Department, Yvonne Jubithana, Jenneke van Bussel and Lauren Risley of the Public Health Department, Evita Pronk of the Planning Bureau, Gideon Wilson and Marlena de Regt of the Community Development Department, Karlijn Verblakt and Rick van Eeden of the Census Office, Juan Adlaon, Reginald Jones, Akim Lake and Augustino Martin of the Waste Management Facility and school bus driver Antonio Hughes all said “I promise” during a ceremony at the court room of the Government Administration Building.

These persons started working for government late last year or earlier this year. It is mandatory for civil servants to take the oath office, a procedure during which they confirm their commitment to act as a conscientious, diligent and dutiful public employee and to keep to the law.

Island Secretary Tim Muller welcomed the new colleagues during a short address. He pointed out that the Public Entity Saba was the biggest employer on the island. “You will join some 185 colleagues from the different departments. The Government is not ‘they,’ but it is ‘you, us.’ We do the work as a team, together with our stakeholders,” said Muller.
Good governance has to do with several topics such as integrity, transparency, clear procedures and processes, solid financial management and execution of different projects. All these are vital for government and the development of the island, said Muller. “It’s a topic that we constantly are working on and taking the oath of office fits in that. The oath of office speaks of not misusing your position in government, handling confidential information carefully etc.”