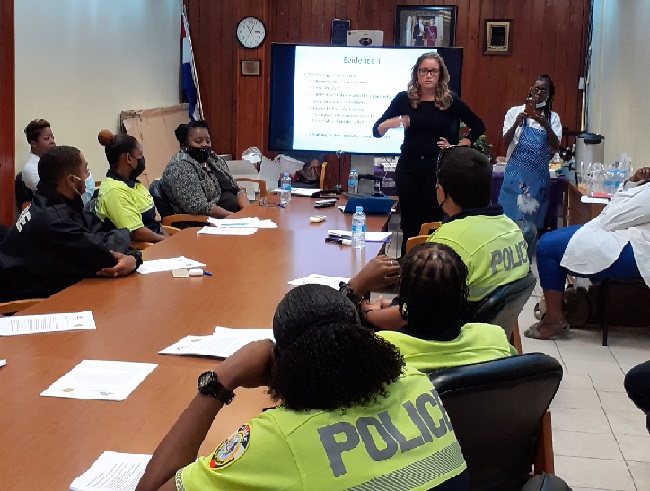 PHILIPSBURG, Sint Maarten — The Prosecutor’s Office OM SXM held two relational violence (domestic violence) workshops with the Police Force of Sint Maarten KPSM on March 18 and 19, 2021, at the Philipsburg Police Station. The workshops were a continuation of the series that started in November 2020, with the goal of creating more awareness, education and guidelines for dealing with relational violence cases by the police.

Handling relational violence cases and keeping the focus on this topic continue to be high priority at KPSM and OM SXM. In 2020, the charge of relational violence was levied in 61 cases by OM SXM. That number is worrisome, and continues to be so for both organizations. Therefore, these workshops, crucial in tackling relational violence, targeted various departments within KPSM including its management, police-in-training and dispatch officers.

OM SXM and KPSM representatives who handle relational violence cases were joined for the workshops by Cassandra Richardson, a gender-based violence awareness trainer, and Vanessa Fraser, Director Safe Haven Foundation, which operates the shelter for battered women and children.

OM SXM representatives explained to workshop attendees how domestic cases are handled when it comes to prosecution and what is needed from the police in such cases. Ms. Richardson had an interactive presentation about gender-based biases and gender-based violence. Ms. Fraser outlined the services Safe Haven provides for victims of relational violence.

OM SXM uses the term “relational violence” opposed to “domestic violence”, because this type of violence is not limited to violence among people living in the same household. It can include partners and ex-partners, immediate family members, other relatives and family friends. Relational violence or assault can include physical and sexual violence, stalking, and threats. Victims of these cases are often women and children.