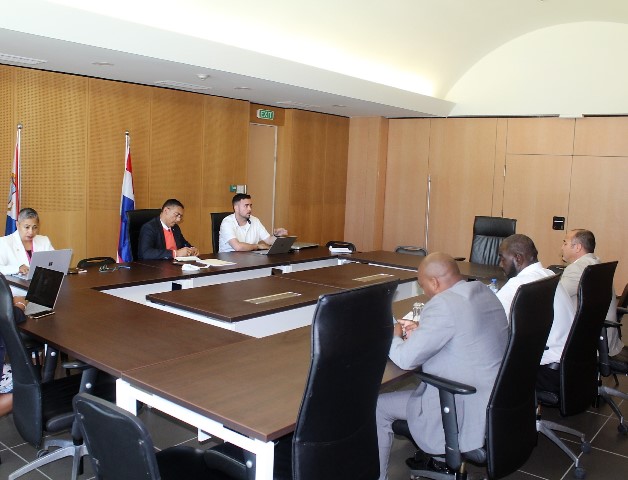 PHILIPSBURG—Shareholder Representative for the Princess Juliana International Airport (PJIA) and Minister of Tourism the Honourable Stuart Johnson has expressed his satisfaction at the Airport received the USD$5 million liquidity support so that its workers could be paid.

He says he will do his “utmost to ensure that the cloud of uncertainty regarding salary for the over 270 workers at PJIA is permanently removed.” Johnson said on Monday, “The “livelihood of the over 270 employees of the airport is my primary concern as I know not only do they need to meet their monthly obligations, but their salary is essential to satisfy the basic needs of their families.”

He said, “I know there are single parents whose families are depending on their monthly salary especially in these still very trying times.”

Johnson cut short a series of meetings planned at the Florida-Caribbean Cruise Association FCCA’s Platinum Associate Membership Advisory Council Cruise Summit (PAMAC last week, and called an urgent meeting with the PJIA Management and Supervisory Board Chairman along with Finance Minister Perry Geerlings upon his return to the island.

During that meeting, the group worked out a way forward for the Airport, which includes receiving a Bridge Loan of USD$15 million for PJIA within the next few weeks, and immediate liquidity support of USD$5 million.

Johnson said, “I must commend my Colleague in the Council of Ministers the Honourable Perry Geerlings for his amazing efforts to secure the liquidity support in the amount of USD$5 million to the Airport.”

Geerlings updated Parliament last week of his intention to do his best to ensure that the Airport does not default on its commitments to its Bondholders. He also told Parliament it was important that the Government of St. Maarten did what it could to ensure the workers received their salary.

Johnson also attended that meeting of Parliament to lend his support to his colleague Minister who fielded several questions from the Members of Parliament regarding the short-term non-interest bearing loan to the airport.

The meeting was requested by Geerlings to inform Parliament of his intention and get their blessings, pending a formal procedure, which will then require their approval.

Following the meeting of Parliament Johnson took note of some media comments made by Members of Parliament who questioned whether he had changed his position on rejecting the loan option from the World Bank Trust Fund and the EIB. Johnson said, “I wish to make clear as Minister of Tourism, Economic Affairs, Transport & Telecommunication and designated Shareholder Representative for our nation’s airport, I remain committed to ensuring that the Airport workers continue to be paid, our airport remains open, and to the complete reconstruction of the airport including US-Pre Clearance.”

He said reiterated earlier sentiments stating that while he welcomes financing options from anyone, “I maintain that the terms and conditions must be amicable and St. Maarten and its people must come first.” In 2018, he had insisted that without seeing the terms and conditions of the loan option of USD$100 Million World Bank/EIB loan and without knowing for sure that the loan offer was not a disguised hostile takeover, he was not willing to support it. At present only the EIB Terms and Conditions are known. It is good to note that the Airport is still ultimately the responsible entity for finding loans and this is still an ongoing process.

“The long-term financing for the Airport is a much-needed process whether via the World Bank/Trust Fund/EIB or Piper Jaffray but in the meantime finalising the short-term liquidity position of the airport remains an immediate primary objective,” Johnson added.

He said, “For St. Maarten to have a sustainable economy and rebuild its Tourism Product, we must have a completely rebuilt airport, complete with US-Pre Clearance as this is key to ensuring that we can attract much more airlines and reduce the cost of travel to our destination thereby making our tourism product the most attractive in the Caribbean region. This will significantly increase visitor arrivals. This cannot be ignored as it is a fundamental aspect of the sustainable redevelopment of our country.”