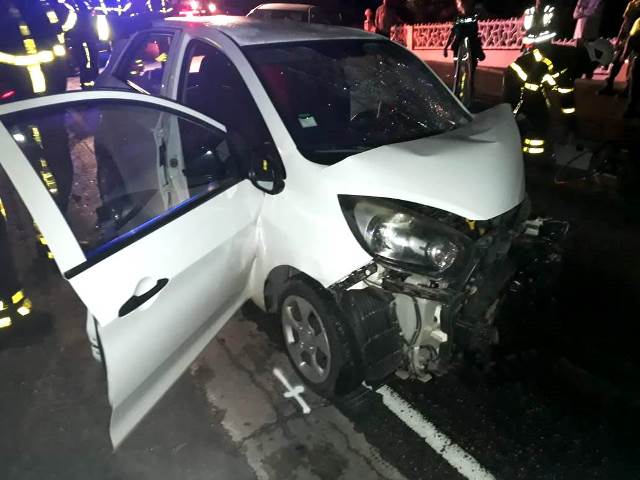 COLE BAY, Sint Maarten (KPS) — The Police traffic Department is presently investigating a traffic accident with one fatality. This accident happened on Saturday January 12th at approximately 01.35 a.m. on the A.J.C. Brouwers road in the vicinity of the Osbourne Kruythoff round about.

On the scene of the accident the investigating officers realized that three private vehicles with license plates P-3237, 9311-AAB and P-8883 were involved.

As a result of the impact the driver of the 9311-ABB died of the injuries he sustained.  The female passenger did show signs of life and was immediately transported by ambulance to the Sint Maarten Medical Center after being freed from the mangled vehicle by personnel from the fire department.

The death of the driver was pronounced by Doctor Mercuur who came to the scene. Neither of the victims was wearing a seatbelt at the time of the impact. The drivers of the P-3237 and the P-8883 did not suffer any injuries, however the driver of the P-3237 seem to have been under the influence of alcohol.

The suspect identified with initials K.N. (18) was arrested on the spot and taken to the Police Head Quarters where he remains in custody for further investigation.

The investigation is still ongoing to determine exactly what the cause of this accident was.

JUAN NEPHEW POST THIS ON YOUTUBE:
You were the best uncle in the world … God has you in a beautiful place, beautiful as your heart was

COLE BAY, St. Maarten  – A family is now mourning the loss of a member after an early Saturday morning head-on collision on Cole Bay Hill claimed the life of one man and left the woman in the passenger seat seriously injured.

This death, unfortunately, marks the first road fatality for 2019.

The woman passenger is hospitalized in a critical condition due to severe head trauma.

The collision occurred when a one vehicle climbed the hill on the wrong side of A.J.C. Brouwers Road slamming into an oncoming car. The driver of the vehicle going downhill was killed instantly.

The driver, who climbed the hill on the wrong side of the road, was arrested by Police and remains in custody pending investigation of the fatal crash.

The reason for the driver taking the incorrect side of the road is not yet clear.