Home Headlines & Top Stories ‘Prime Minister Sint-Maarten should explain the violation of human rights in The...
Share on Facebook
Tweet on Twitter
October 10, 2018 | John Samson
Source: https://caribischnetwerk.ntr.nl
THE HAGUE – The VVD wants the prime minister of St. Maarten to be called to The Hague for an explanation of the violation of human rights with the detention of casino boss Francesco Corallo.
The European Court of Human Rights ruled that Corallo was held on Sint Maarten under inhumane conditions. He sat for six months without enough daylight and ventilation in a crowded police cell. 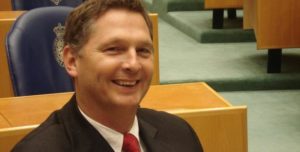 ‘Prime Minister Sint-Maarten to the Netherlands’
The VVD is furious that Sint Maarten violates human rights. Member of Parliament André Bosman wants to know in a debate with Secretary of State Raymond Knops (Kingdom Relations) on Tuesday evening what the Dutch government will do with Sint-Maarten.
“I also think it’s about time that the minister-president of Sint-Maarten comes to account in the Council of Ministers,” says Bosman. The VVD finds that Sint-Maarten is forced to improve the prison if necessary.
The Netherlands embarrassed
Politically and internationally, The Hague is greatly embarrassed by the ruling. “It is super annoying that the Kingdom is being held accountable for the negligence of Saint Martin himself,” says Bosman.
The Kingdom of the Netherlands must pay damages and costs to Corallo from the European Court of Human Rights. In total this involves 10,500 euros.
VVD: ‘We will send the bill one-to-one directly to Sint-Maarten’
The prison of St. Martin has been a headache file for years. The VVD and SP have previously insisted that The Hague must intervene considerably . In 2017, research by the Caribbean Network showed that the prison is as leaky as a basket .
Not the first time
It is the second time in a few years that the European Court rules that the kingdom violates human rights in the Caribbean. In 2016 it concerned the case of James Murray. He was imprisoned for 30 years and was treated as ‘human waste’, without psychological treatment and the prospect of release.