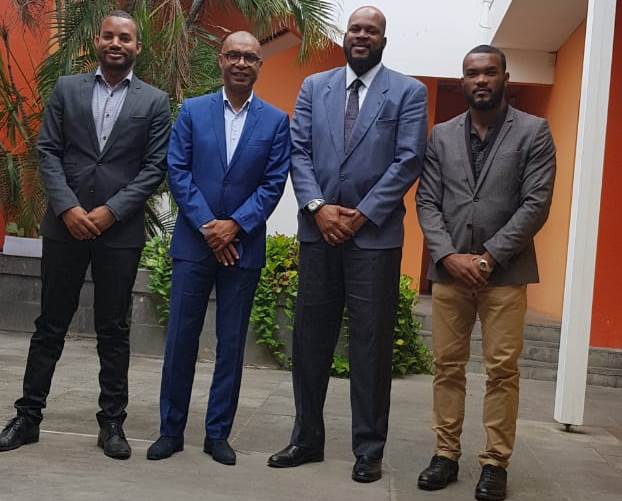 Minister of Public Housing, Spatial Planning, Environment and Infrastructure (VROMI) Miklos Giterson recently returned from a working visit to the Ministry of Traffic, Transport and Urban Planning (VVRP) in Curacao.

Mr. Harry Huisden and Ms. Cidy Do Rego of the SOAB organized the visit, with the objective of receiving information and guidance on best practices from the recent successes that VVRP’s Permits and Domain Affairs departments have experienced.

In Curacao, these departments have initiated comprehensive projects that have yielded positive results within the previous two years, in spite of the variety of challenges facing them. In addition to Minister Giterson, the St. Maarten delegation consisted of the acting heads of the Departments of Permits and Domain Affairs, Mr. Charlon Pompier and Mr. Raeyhon Peterson, respectively.

Giterson took the opportunity to meet with his counterpart at VVRP in Curacao, the Honorable Minister Zita Jesus-Leito, where they discussed several ministry-related topics.

Similar to the current situation in St. Maarten, Domain Affairs Curacao has a significant backlog with regards to the collection of payments for long-lease land. Director Jairo Martis provided some insight to the delegation with a presentation of their current challenges and site visits to various key areas for the department.

Within the last year, there have been information campaigns implemented by the department with the intention to inform the public of recent developments within the department.

Mr. Martis demonstrated how current challenges, such as the backlog and illegal land occupation in Curacao, were being tackled by his department, most notably the creation of a task force specifically created to target these two issues.

These initiatives were handled in cooperation with the SOAB, which has actively contributed to the realization of these projects within VVRP.

“It was surprising to see that the department is significantly larger in number when compared to Domain Affairs in St. Maarten,” Peterson offered in a statement. “I was impressed with the progress they have been able to make in such a short amount of time.”

VVRP’s presentation showcased how the Permits Department on Curacao functions and how the country intends to streamline and digitize the building permit process, a move that will significantly reduce the time between submission and approval for applicants.

This was of particular interest to the delegation as locally, Permits has been dealing with a backlog for a number of years which has only been complicated by the post-Hurricane Irma construction boom. Until adequate funding can be secured for a large-scale improvement project, decisions to curb waiting times  and improve productivity have been made.

“Immediately following Hurricane Irma and until the start of the 2018 season, we implemented a fast track permit process for roof reconstruction, which many have benefitted from,” Pompier explains. “Whenever possible, zero-cost decisions have been made in an effort to increase overall output.

The Ministry has also requested and has received approval from the Government of the Netherlands to have three technical workers transferred to St. Maarten for a period of four months to assist with the backlog, as well as improve the financial management of the department.”