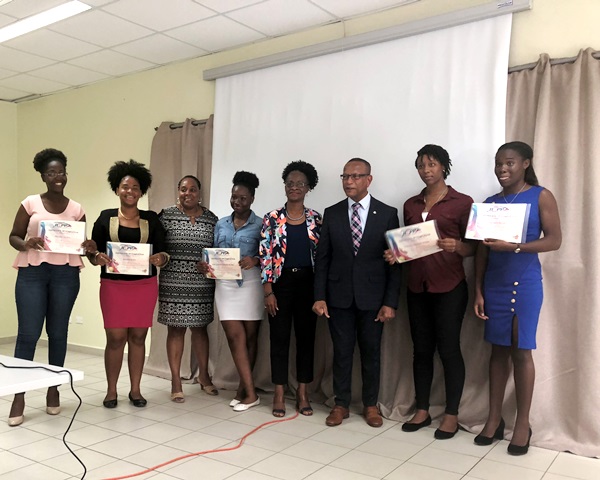 PHILIPSBURG, Sint Maarten — The Business Outreach & Placement Program awarded certificates of completion to eighty participants on Friday at the University of St. Martin. The graduates completed the training workshops organized by the Department of Youth Affairs and job placement for the month of July. Varying government departments and agencies, as well as three private sector companies and two high council organisations, accommodated this year’s placements.

Minister of Education, Culture, Youth and Sports, the Honourable Wycliffe Smith addressed the gathering, congratulating the graduates and the organising team, led by Ms. Faye Arnell. In his address, Minister Smith described the graduates as “a cut above the rest”. He commended them, saying, “This program is one vehicle that our Government has been able to offer in preparing you for the world of work. Yet, it is your effort, winning attitude, and personality that guarantees your continued achievement.”

This Government has outlined several plans and initiatives to ensure proper education, training, and job availability for young people in its Governing Program 2018-2022. However, the minister emphasised that one’s personal efforts are key to success. With a mantra from renowned educator, Camille Baly, Minister Smith encouraged the graduates saying, “Know who you are, do your best, and do the right thing even if no one is around to see you do it.”

The BOPP program has been running annually since 1998 and rose to placements of 100 participants in recent years. This year, there were 145 applicants, 90 of whom successfully completed the training workshops. However, with several partnering organisations still recovering from the effects of hurricanes Irma and Maria, there was a reduction in the number of available placements this year, resulting in 80 job placements.

The Ministry of Education, Culture, Youth and Sports, particularly the Department of Youth Affairs, encourages all companies and organisations, in both private and public sectors, to make preparations for accommodating the participants of the 2019 BOPP program.