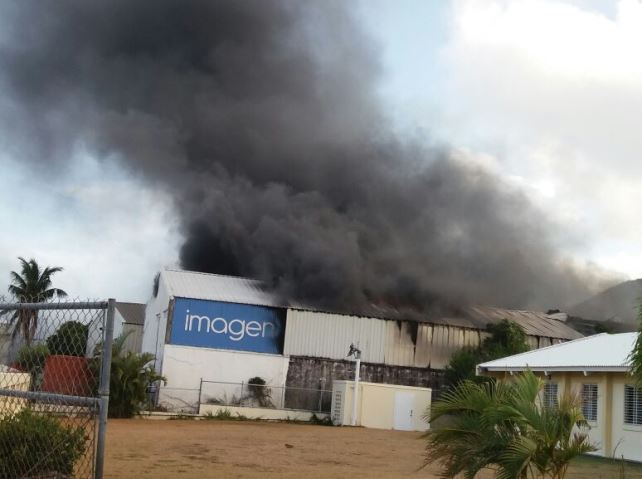 COLE BAY, Sint Maarten — On Sunday July 8th at approximately 06.30 a.m. the police department and fire department were called for a fire at a warehouse in Orange Grove close to PRIME Distributors. On the scene the investigators learnt that the warehouse occupied by H-VAC air-conditioning had caught fire. The warehouse in question was mainly used to store air-conditioning and maintenance equipment and materials.

The fire department immediately went on extinguishing the fire which had grown quite large. Due to the toxic smoke and fumes that was caused by the fire residents in the area were advised to close all windows of their home or to temporarily vacate the area to avoid the inhalation of the smoke. The police had to close off several street and diverted traffic in other directions.

The fire department successfully contained the fire not allowing it to spread to other nearby warehouses. At approximately 10.00 a.m. the fire was totally contained and posed no danger for spreading. Residents were allowed return to their home and traffic was again allowed to flow normally. No one was injured during this fire.

The cause of the fire is still unknown.