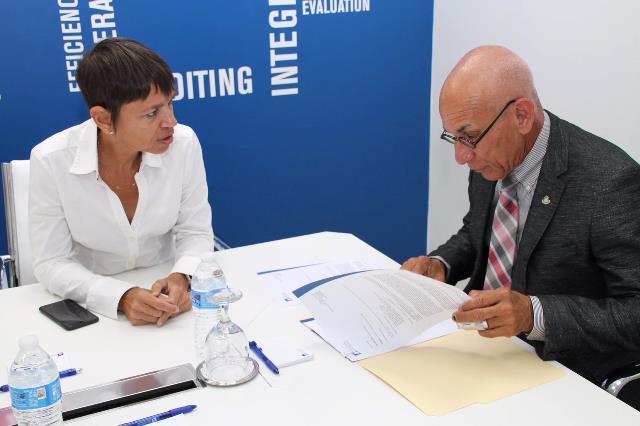 The institution, which is tasked by law to investigate the expenditure, income and policy of government, moved to another location on the Juancho Yrausquin Boulevard #10, in November 2017.

Minister Ferrier, has been proactive in maintaining contact with the General Audit Chamber since taking office.

During the last meeting with the General Audit Chamber, held at Government Administration Building, the chairman extended an invitation to the minister to visit the facilities.

On Thursday, May 31st, the Secretary-General, Ms. Joane Dovale-Meit, received the minister and members of DCOMM. The delegation was taken on a brief tour of the office and explained how the General Audit Chamber dealt with the continuity operations and restoration of facilities .

Insurance proceeds were used for the recovery effort, thus minimizing the burden on the national budget, and the impact on operations was short. The audit work continued in October. The General Audit Chamber transitioned to cloud-based systems early in 2017.  In collaboration with local businesses, the institution was recovered by the first quarter of 2018.

“I’m a believer in accountability and professionalism, and the General Audit Chamber certainly promotes those qualities,”  according to Minister Ferrier.