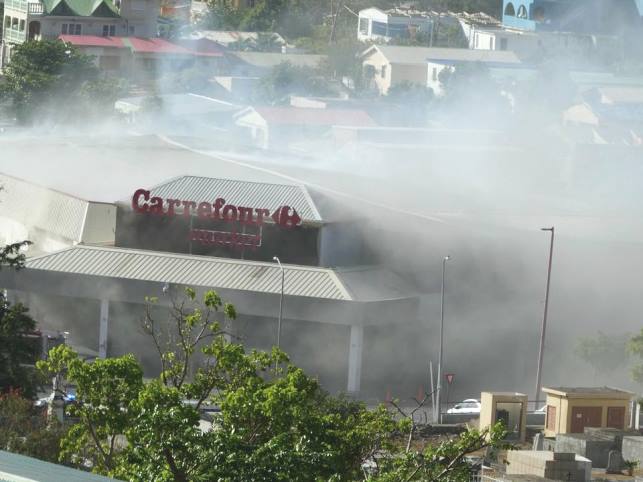 CUL DE SAC, Sint Maarten — On Thursday June 21st at approximately 07.35 a.m. the first call came into the emergency dispatch (911) stating that heavy smoke was coming through the roof from the interior of  Carriefour Market (former Grand Marche) on Bush road and that the building was burning on the inside.

Immediately several police patrols and fire Department were sent to the scene to investigate what was taking place. On the scene the investigating officers realized that the building was indeed burning on the inside. The fire-department immediately went to work in extinguishing the fire while the police officers on the scene diverted traffic into other directions and not allowing any traffic to use the Church Hill round about.

The fire was immediately contained by the fire-department to avoid it from spreading to other parts of the building and in doing so minimized damage to the building and its contents. As a result of the fire traffic was backed for approximately three hours. At approximately 10.35 a.m. the fire was totally under control and traffic could flow normally.

No one was injured in this fire. The exact cause has not as yet been established. When this information becomes available the media will be informed.