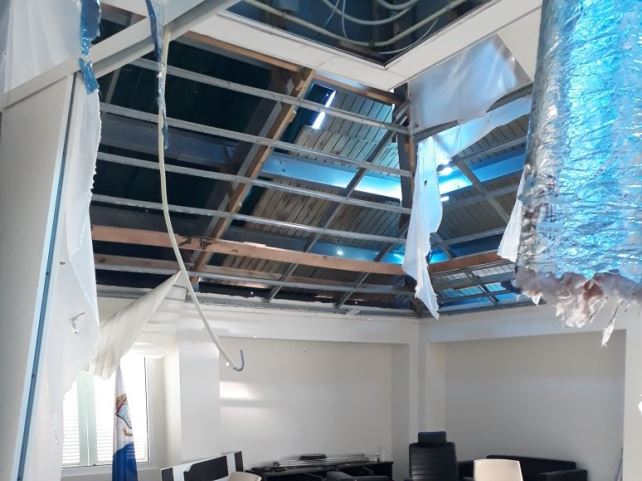 PHILIPSBURG, Sint Maarten — Settlement of the insurance claim for the repairs to the New Government Building due to the passing of hurricanes Irma and Maria pave the way for reconstruction of the building with an anticipated completion date before the start of the upcoming hurricane season. The building is owned by SZV but rented by Government. Damages sustained were both to the exterior and interior of the building and were estimated at USD 2.653.000,-. The insurance claim for the damages was settled for USD 2.450.000,- after a deductible of USD 540.000,-.

The exterior damages being namely to the roof and the shutters. The interior damages are visible on Levels 1 to 4 of the building. The data writing system, air-conditioning, plumbing and electrical systems of some of the offices were also on the list of damages claimed.

Minister Lee stated, “I would like to commend the SZV team that managed its insurance claim, obviously one of the first and most critical steps is getting the financial resources for the rebuilding process. The Government building which is rented from SZV serves a command post for disasters. I am confident that SZV will work hard to ensure that the building is repaired and repaired to a high standard, with the knowledge of what Mother Nature is capable of.
With each step, with every reconstruction project, we create job opportunities for our people and much needed economic activity. St. Maarten thanks SZV for getting another reconstruction project started!”

The construction of the New Government Building was finalized by SZV eight months ago, just before the passing of the storms. Government has a lease agreement of 30 years with SZV and commenced rent payments in July 2017. The move of the various departments to the new building has allowed Government to save on double rents. Despite the challenges of the country after the passing of the storms, Government has consistently been able to uphold their monthly rental agreement.

Fortunately, the building was not severely damaged. After the storms, the building was able to quickly and comfortably house those Government departments that had not yet moved in prior to the storms but were severely damaged. The cooperation of the various project teams allowed for a quick move of those departments into the new building, minimizing disruption to critical Government services to the public after the storms.

Directly after the storms, the SZV project team was able to assess the damages and initiate the claims procedures. The estimate of repair costs was completed by ICE and the insurance claim was submitted to Gulf Insurance, the assigned insurance company for the building. Currently the project team is nearing the completion phase of the internal repairs. Once completed, exterior repairs will continue, mainly to the roof and shutters. The repairs have been going smoothly causing no interruption to the Government services rendered to the public.

“SZV would like to thank the project team for their continued hard work as well as the insurance company for the efficient processing of the claims procedure to be able to finalize all repairs necessary, in time for the upcoming hurricane season.” – Management SZV