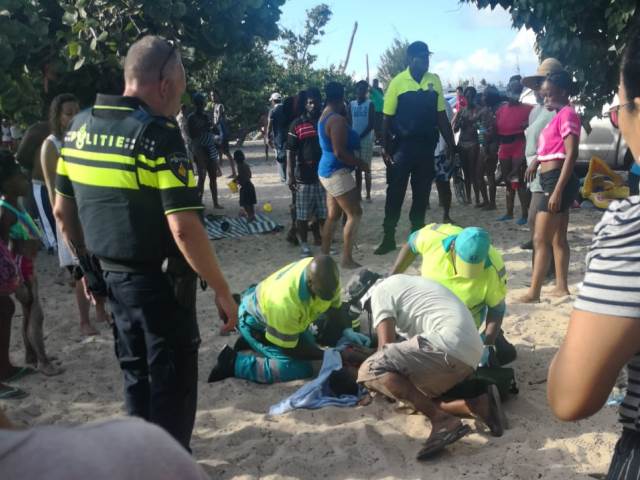 On Sunday May 27th at approximately 04.25 p.m. the Emergency Dispatch received its first call of the drowning of a little girl at the Mullet bay Beach. The caller also stated that the victim had already been taken out of the sea and brought ashore.

The victim however was not responding.

Immediately after receiving this message police patrols and paramedics were sent to the scene to investigate what had taken place. On the scene the investigating officers and paramedics learnt on their arrival that the six year old female victim started to respond shortly after was given mouth to mouth resuscitation by a family member.

The paramedics who arrived on the scene took over the treatment of the victim. The victim was then transported to the Sint Maarten Medical Center where she remains in stable condition, in the ICU for observation.

MULLET BAY, Sint Maarten – On Sunday, May 27, at approximately 5:00pm, eyewitnesses at Mullet Bay Beach told 721news that a little girl nearly drowned after she encountered difficulties in the water.

A man, believed to be a family member, was seen performing CPR on her after she was pulled out the water unconscious. After a while, she regained consciousness and paramedics arrived on the scene.

She was transported to the St. Maarten Medical Center (SMMC) for further medical treatment.

As soon 721news receives more information, we will update our readers.