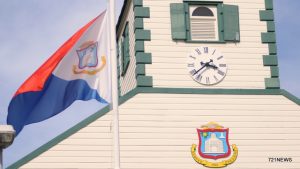 PHILIPSBURG – Gerardo Antonio O.V. walked out of the courtroom a free man on Wednesday morning after his attorney Geert Hatzmann successfully defended him against accusations of looting in the aftermath of Hurricane Irma in September of last year.

The public  prosecutor demanded a 4-month prison sentence, 2 years of probation and 120 hours of community service, but the court acquitted the defendant.

The 53-year old defendant presented receipts of goods the police had taken from his house, but the public prosecutor said later that these receipts do not relate to the items that are specified  in the charges against O.V. Among those goods were mattresses, airco units, watches and garden chairs and tables.

The prosecutor referred to a photo that appeared on Facebook showing the defendant’s car with three mattresses on its roof, still in their packaging. “That picture was the basis for the investigation,” he said.

The prosecutor said he did not buy the defendant’s story that his son was behind the wheel. He noted that the point of departure for looting after Hurricane Irma is a prison sentence. But because the defendant is a first offender, the facts are six months old and the Pointe Blanche prison is full, he came with a demand for community service and a conditional prison sentence.

Attorney Hatzmann criticized the quality of the dossier and wondered why no complaints for the supposedly stolen goods had been filed.

“Furthermore, these are rather general items. ”I also have garden tables and chairs in my house but I really don’t have receipts for them.”

Hatzmann said that the minimum requirements for proof are not there and he asked the court to acquit his client.

The judge agreed that the evidence against O.V. was very mediocre. “The Facebook picture of the car is suspicious but there is no evidence that the defendant was behind the wheel. The airco units are also a suspicious story but it is difficult to say that they stem from theft. All this is suspicious but it does not add up to evidence. Therefore, I acquit you.”