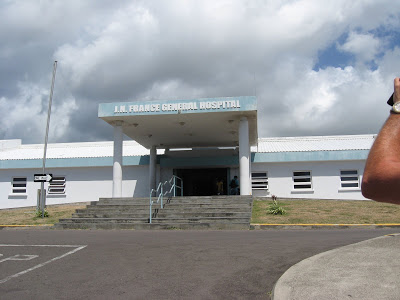 Basseterre, St. Kitts, – While the Office of the Prime Minister Dr. Timothy Harris has issued a statement highlighting his family’s MRI business that raked in nearly EC$1 million last year, the nation has been told not to be distracted from his government’s persistent shortcomings and failures in the health sector.
During last Wednesday’s edition of Issues on Freedom 106.5 FM, Dr. Terrance Drew stated that although MRI is a needed diagnostic service, the equipment should have been located in or near the JNF Hospital for ease of access.
MRI complements the x-ray, ultrasound and Ct-scan services established by previous administrations, but the service was readily available on the hospital compound.
The big question being asked is why did the Timothy Harris Unity Government (THUG) decide not to establish an MRI facility at the J N France General Hospital?
A deal was done to use the MRI at the primate research facility managed by Alexis Nisbett, said to be a nephew of Prime Minister Harris.
Nisbett is also part of another deal that recently saw the installation of a privately-owned CT-scan machine at the JNF General Hospital when the existing one could have been upgraded.
Reports are that the new Ct-scan machine has had several challenges. It started and stopped on several occasions. It is believed that such a thing would not have happened if the knowledgeable technical staff in the radiology department at JNF General Hospital was consulted upfront.
The JNF laboratory staff has been told that they cannot be incentivised by the local company.
According to a news release from the Office of Prime Minister Harris, the MRI machine at the nephew’s place served over 450 persons in 2017 with charges ranging from EC$950 to EC$2239 per procedure.
This amounts to nearly EC$ 1 million in fees collected by the nephew and company.
“You now understand the type of money they are making. We are talking millions in the years. Less than a million dollars can be used to purchase a brand new MRI machine,” said Dr. Drew.
“We know who is benefitting. There was no public tendering for the service,” added Dr. Drew.
If the MRI was at JNF Hospital, some of that could have gone to buying ambulances and other needed equipment, and paying auxiliary workers their full holiday pay.
He said all of this adds to the evidence of a health administration at an all-time low including the unconstitutional absence of a Permanent Secretary supported by the learned Attorney General, Vincent Byron Jr.
There is also the systematic cleansing of the administrative core of the Ministry of Health engineered by the Junior Minister, Sen. Wendy Phipps, who obviously prefers to advise herself.
The Junior Minister acts as if she is the Senior Minister, the Permanent Secretary and the chief technical officer in health – three functionaries in one.
A disturbing outcome of the machinations in the health ministry is the unprecedented attrition of talented and experienced personnel including nurses. Not because they are past the age of retirement, but because of widespread frustration over the seemingly emasculated Senior Minister Eugene Hamilton and a Junior Minister, who is ably assisted by officers who tow her line without question.
It has been pointed out that there are no regulations governing the MRI machine that are known to the medical community.
“Use of the MRI has to be closely monitored to see if more MRIs are done than are needed. The more MRIs, the more money for the MRI/CT-Scan deal makers,” said a source familiar with similar operations.
“Doing things backward and for personal gain is the only definite TUG accomplishment,” said the source, who pointed out that the nephew is most favoured as he is the chairman of the Board of Directors at the St. Kitts-Nevis National Bank and sits on the Board of the Development Bank of St. Kitts and Nevis .