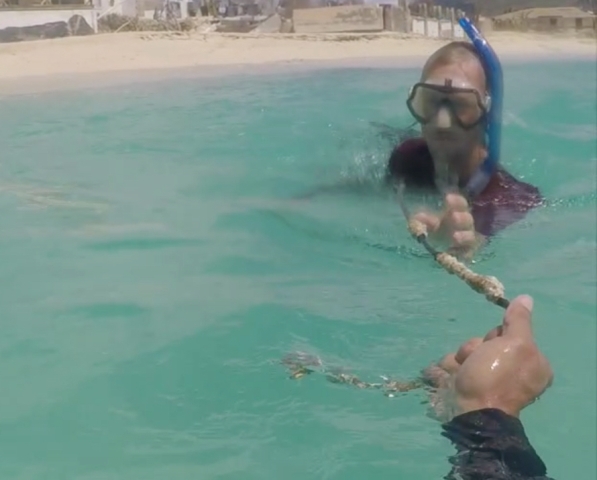 Simpson Bay , Sint Maarten — The Nature Foundation is continuously monitoring the state of St. Maarten’s beaches to ensure the safety of bathers and prepare for the upcoming tourist season. If the visibility is sufficient the shore is surveyed up to three meters in depth and hurricane debris is removed if possible. The Foundation continuously advises to be cautious when entering the water and to wear protective footwear when visiting the beach; hurricane debris is still washing up ashore and could cause potential injury.

On Simpson Bay Beach visibility and water quality improved significantly and hurricane debris from Halley Drive to Karakter Beach Bar has been removed by the Nature Foundation. It is now considered safe to swim and enter the water; however a large wreck is still located on the West side of Karakter Bar, in the direction of Beacon Hill.

The 30 meter wreck has been troubling swimmers for a long time and sunk already in 1991 and so far salvage has been unsuccessful. Hurricane Irma exposed the wreck even more with sharp metal edges uncovered directly at the shoreline beside Karakter Beach Bar. Measurements need to be taken in order to protect swimmers against injuring themselves at the wreck and caution is advised.

Great Bay Beach has been surveyed again, however water quality is still considered poor, visibility is still insufficient in order to remove hurricane debris from the shallow waters. Swimming at Great Bay Beach is not recommended but hopefully possible in coming weeks. Beach reconstruction is also still taking place to clean the board walk and surroundings.

The Nature foundation also recommend to avoid Guana Bay and Indigo Bay due to hurricane debris located at the beach and shoreline, also runoff and wave action of the passed few days decreased visibility and water quality.